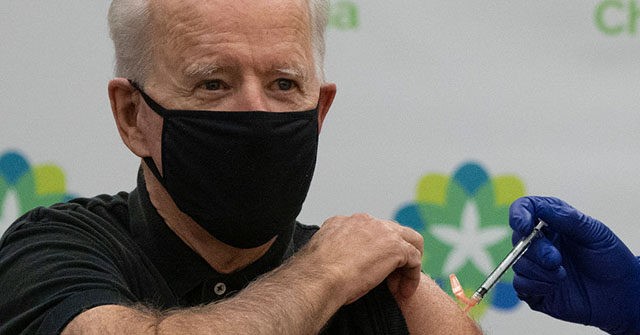 President Joe Biden has officially botched the rollout of the coronavirus vaccine, as his Food and Drug Administration (FDA) suspended the use of Johnson & Johnson’s vaccine Tuesday because of just six reported claims of blood clotting.

6 cases out of 7 million people. What a disaster. This is going to get people killed. And it’s going to create more vaccine hesitancy. These people don’t understand cost-benefit analysis. They keep making mistakes by orders of magnitude. https://t.co/DQdvqoujHR

The Biden administration promised that unlike its supposedly “political” predecessor, it would use science to guide its approach to the coronavirus pandemic.

Instead, it has adopted the unscientific, risk-averse approach to public health that has been typical of most Democrat-run “blue” states during the pandemic, who have used drastic and draconian shutdowns at the slightest hint of medical risk.

COVID-19 Response Coordinator Jeff Zients told reporters in the White House briefing room that the “pause” would not have a significant effect on the national vaccination effort, because Johnson & Johnson provides a small percentage of vaccines.

That overlooks the likely impact of the FDA’s announcement on the public’s willingness to risk the shot. It also ignores the fact that 15 million Johnson & Johnson doses were ruined by a production error — on the administration’s watch.

Biden has claimed, falsely, that he “turned around a slow-moving vaccination program” he inherited from President Donald Trump. That was always a lie: until now, the distribution of vaccines had risen steadily since December, when the vaccines were first produced under Trump’s Operation Warp Speed.

A graph of vaccine distribution until now is a straight line, with no “turnaround” — just a blip in mid-February, when winter storms and a power outage in Texas interrupted the distributions.

☝️This adds a tenth to our 7-day average and is the best Monday we’ve seen. Tuesday will replace last week’s Easter lull + likely do same.

At the end of Trump’s term in office, the U.S. was vaccinating nearly one million people per day, on a pace to hit 100 million vaccinations by the end of his first 100 days — a commitment that the Trump administration had already made.

Biden just took over Trump’s goals and pretended they were his own — even pretending he had stood up to the media’s skepticism. In fact, it was Trump who had faced down the media when he said, correctly, that vaccines would be widely available by April.

If anyone was to blame for making distribution slower than it might otherwise have been, it was Biden and his party. Both Biden and his running mate, then-Sen. Kamala Harris (D-CA), were skeptical of any vaccine being developed by Trump. And Democratic governors insisted on testing any FDA-approved vaccine on their own, hinting that it would be unsafe.

Hopefully, the vaccine rollout will soon resume its pace. But if anyone “botched” the rollout, it was clearly Joe Biden.

‘Brave New World’ of Embryos Grown Outside the Womb … Closer Than You Think!