Photos shown to the jury, in US v Tsarnaev, of injuries caused by the Boston bombing (from buzzfeednews.com)

Review of the 2015 book, And Nobody Died in Boston Either, by James Fetzer and Mike Palecek

First off, buy the book. It is a wow.  I ordered the edition that said “scratch and dent, $15.” It arrived without a hair out of place.  Moreover, it is packed with color photos which is expensive stuff. And there is a Timeline of the bombing that occupies 57 pages – yes, I said 57 pages, written by James Tracy – that covers such things as what hospital personnel had to say, and what the Tsarnaev parents said.

The two editors recruited several top writers about the Boston Marathon bombing to join in proving that no serious harm was done by any bomb that day – April 15, 2013. Among the points made in this book, And Nobody Died in Boston Either, are:

#1. Jeff Bauman could not have possibly lost two legs, below the knee, as is claimed in the official story, and still have been sitting up in a wheelchair, and talking, 7 minutes later.

#2. His sidekick (on the wheelchair ride), Carlos Arredondo, is the fake of the century. He made many specific statements that are provably untrue.

#3. No ambulances, except on near the library are visible in any video of the Marathon, even though there were allegedly 264 victims, and every Marathon has ambulances on standby in case runners have heart attacks.

#4. The side of the boat on which Jahar allegedly wrote his confession was curved and therefore the neat script that the jury saw, could not have been written by Jahar.

#5. Stella Tremblay, a representative I the New Hampshire legislature, immediately expressed doubts.  Her chamber voted 312-0 to rebuke her and to offer respect to the injured.

That last one was news to me, but then I lived in Australia, not New Hampshire, when it happened.

I have named this Gumshoe article “If the Marathon Bombing Was Faked, How Many People Could Have Kept the Secret?” as anyone who reads it will be stunned to realize how many people lied. Luckily the book quotes some of the on-the-spot liars in full. Persons who supposedly were right there on Boylston St said they could see body parts flying around. No such body parts were ever found.  They lied.

When I get a chance, I will select some those statements and ask the makers of the statements if they still hold that claim. I shall also proceed to create a new petition for a Writ of Error Coram Nobis based on material that was submitted to the court that is now clearly invalid. Certainly, one would want to quiz the persons shown in this picture: 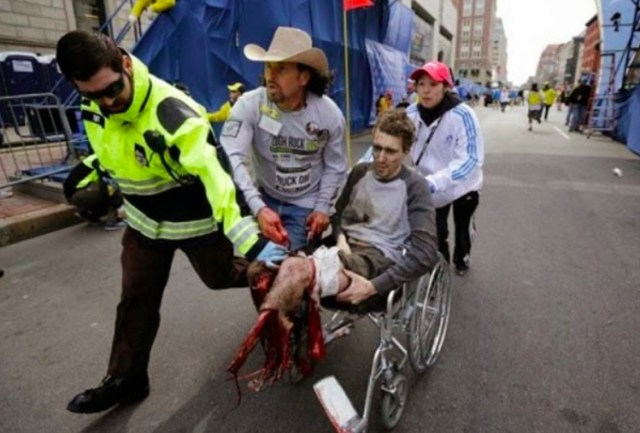 The building on the left is the Boston Public Library, at 700 Boylston St.

We know the story told by Carlos, and I have read Jeff Bauman’s book Stronger – but who is the man in the lime vest? and the girl with the red hat? What can they tell us?  Who is their employer?  Were they taking part in an “exercise”?

The US Supreme Court will be looking at the Tsarnaev conviction later this year. The nine justices are scheduled to address only the question of whether the July 2020 First Circuit appeals decision to commute Jahar’s death sentence to life should be overturned. But how could they not consider if the man was guilty in the first place?

I hereby invite anyone who contributed “bad” information to contact me. The Department of Homeland Security openly invites volunteers to perform as injured actors when they do a mock-up of a terrorist incident or a natural disaster, for training purpose.  If there were such persons at the Marathon – and Fetzer’s layout of photos is compelling – many of them acted innocently.

What I mean is, that if they agreed in advance to participate “in an exercise,” such as by faking an injury, they would have been surprised later to realize they had caused a big lie to be told to the world. Any of us could have been in that predicament. Wouldn’t you then feel guilty if you heard that a man (Jahar) was on Death Row as a result of your faking an injury?

Also, some who participated in the alleged acting were underage.  But the bombing was 8 years ago, so they may be of legal age now.  By the way, if any child was indeed made to fake an injury, I consider that a terrible thing to have done to a child, and that person should be apologized to. (And don’t forget that subornation of perjury is a crime that puts the blame where it belongs!)

I’d also like to hear from any of the 302 New Hampshire legislators who later had second thoughts about their vote against Tremblay.  It is very unlike New Hampshire people to call for a blocking of free speech.  In fact, in a parliament there should be extra oodles of free speech. Surely the full 302 are not holding steadfastly to the belief that all was kosher at the trial of Tsarnaev.

A Note on My Keeping Out of the Evidence-Sleuthing

I am the author of The Soul of Boston and the Marathon Bombing – which is a revised version of my earlier book, “The Marathon Bombing: Indicting the Players”.  The “players” I wanted to see indicted were the FBI, the Boston Globe, and others. In December 2019, filed a civil RICO suit against such players. My case was dismissed when I failed to reply to a letter that was sent to my home address in December 2019. (It was returned to the court as Undeliverable, even though I was right here and got Christmas cards at this address.)

The allegations I made against the defendants in the RICO suit were not based on the kind of evidence that is prominent in the book edited by Fetzer and Palecek, which has principally to do with photographs. I have mainly attended to the “crimes against justice” that went on in the courtroom during the 2015 trial.

I am worried that by my printing this book review, folks may start to engage with me about the photographs, the fake blood, etc.  I do not want to go there. I consider the Fetzer/Palecek book a triumph of good reporting. I originally shied away from any of the analysis of videos, such as those shown early by Peekay, for two reasons:

Actually, I have a prejudicial view that many of the persons who offer some of the best and most incriminating videos are “controlled opposition.”

So please let me do my thing at which I have some actual skill – recognizing when lawyers and judges are behaving wrongly. Don’t construe my declining to look at videos as disparagement of them. Please do buy this book. It’s not just pictures. It has very thoughtful analysis of “silene and omissions.”

Here is one example. Chapter 7, written by Sterling Harwood, JD is entitled “Boston Bombers Debunkers Debunked: Snopes.com.” On page 113, Harwood complains about Snopes (website) letting Dr David Schoenfeld get away with too much. He says: Snopes admits that the doctor aid that Tamerlan Tsarnaev:

“has so many penetrating wounds when he arrived at Beth Israel Deaconess Medical Center early Friday that it isn’t clear which ones killed him.”  Snopes.com “also admits that Dr Schoenfeld did not address police’s assertion that Tamerlan was run over by a car driven by his brother …Snopes .com just ignores the obvious question of why Dr Schoenfeld did not address that assertion by police.”

Harwood comments: “Isn’t failing to address the obvious question, the key part of the official story that would get the police off the hook, the hallmark of a coverup?”  I say Yes, it is. Thank you, Sterling Harwood.

Here is a part of the book that GumshoeNews editor Dee McLachlan will gobble up. It is an appendix by Nicholas Kollerstrom, PhD (astronomy), written just for this book.  It compares the case of Charlie Hebdo (January 2015, in Paris) with the Boston bombing. From page 396:

“No possible motive for Islamic attack…detailed knowledge of timing of journal staff meeting, a perfect escape, etc. Also leaving ID in a car with other ‘Islamic’ gear – surely journalists are not going to fall for that?  Then the road being cordoned off beforehand, kept traffic-free.”

Oh no, don’t get us started on the Bourke St Rampage!

We Are Not Only One Big Team, But We’re Also One Big Family!