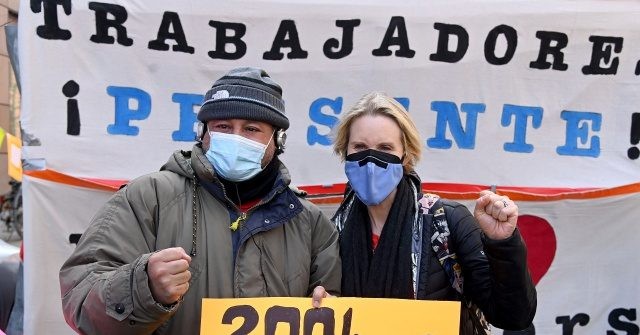 While more than a million jobs have been lost in New York and an estimated 80,000 New York businesses may not make it to the end of the Chinese coronavirus pandemic, Cuomo and state Democrats will provide $2.1 billion in stimulus checks and unemployment-style benefits to nearly 200,000 illegal aliens.

In comparison, as Breitbart News reported, small businesses devastated by the pandemic are receiving just $1 billion in tax credits and grants — $1.1 billion less than illegal aliens in the state.

Many illegal aliens who stand to benefit from the aid are ending the 23-day hunger strike they started last month, eating a meal at a victory rally on Wednesday.

This victory comes after one year of statewide organizing efforts from the #FundExcludedWorkers Coalition — led by impacted workers, culminating in two hunger strikes.

History is made today! pic.twitter.com/9SlOPcd5Dy

THANK YOU to @DebAxt, our former Co-Executive Director who played a key role in bringing this victory for excluded workers, from talking to electeds, unions, to community organizations that helped shape @FEWCoalition.

Absolute JUBILATION as immigrant workers celebrate their $2.1B victory to #FundExcludedWorkers in NY. @FEWCoalition pic.twitter.com/SQBKifwrEk

Our incredible leader Ana, who fasted for 23 DAYS to #FundExcludedWorkers: “it hasn’t only been 23 days that we’ve been in pain, it’s been decades waiting for our dignity to be recognized.” pic.twitter.com/aKWyJJPkFX

“We need a just and accessible fund. This is the greatest economic stimulus for immigrants of color in the state budget.”

Eliana, @VendorPower member and street vendor for 38 years, went on hunger strike and with the “women leaders of the strike, the mothers. I cried when I heard the news – it is a triumph for me and my people. I can finally pay my debts.”#FundExcludedWorkers https://t.co/SvH1lyppQy pic.twitter.com/nspkyrz4X7

New York, and particularly New York City, has been ravaged by Cuomo and Mayor Bill de Blasio’s (D) economic lockdown measures that have now been in place for more than a year. Historic venues, hotels, restaurants, nightclubs, and local neighborhood spots have had to close their doors for good as a result of the lockdowns.