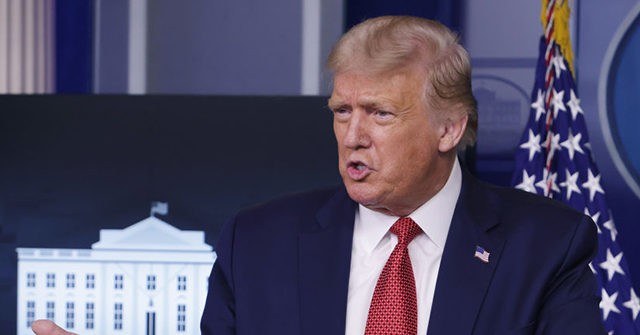 President Joe Biden announced Tuesday that he was moving up the deadline for all American adults to be eligible for the coronavirus vaccine to April 19 — a deadline the media suggested was impossible when President Donald Trump set it.

In September 2020, during the most intense period of the presidential election, the Washington Post ran the following headline: “Trump says, without evidence, every American will get coronavirus vaccine by April.”

The story covered the fact that Trump had contradicted the head of the Centers for Disease Control and Prevention (CDC), who said that the public was unlikely to have access to the vaccine until the second and third quarter of 2021. Trump said the CDC director misspoke. The episode was portrayed as an example of Trump politicizing science in the pandemic.

When Centers for Disease Control and Prevention Director Robert Redfield said earlier in the week that the general public was unlikely to get access to a vaccine until the second and third quarters of 2021, echoing other scientific leaders in the administration, Trump said he’d misspoken.

Trump then said a vaccine would be ready in weeks and swiftly made available, despite the fact that no one knows yet when sufficient data will be collected from clinical trials to show that one of the vaccines in late-stage trials is effective or safe.

Then, at a news briefing Friday, Trump announced a specific timeline, not far off from the one Redfield had laid out two days earlier.

The article noted, skeptically, that vaccine distribution “will depend on data that convinces regulators that the vaccine is effective and safe,” and that the clinical trial of a vaccine by AstraZeneca was on hold.

Pfizer announced the success of its coronavirus vaccine the week after the election.

Biden, who announced the April deadline, has repeatedly made the false claim that his administration “turned around” the vaccine distribution program, which was already on its present trajectory before Trump left office, thanks to the success of Operation Warp Speed.