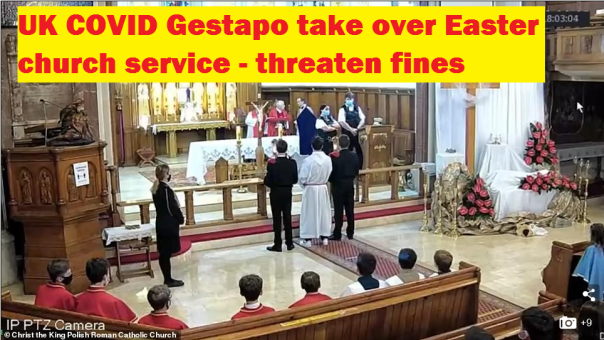 London Metropolitan cops with no sense of decorum or justice insert themselves into the middle of an Easter liturgy to enforce fraudulent COVID regulations. Canadian cops (below) back out of Street Church on the boisterous orders of outspoken pastor Artur Pawlowski. The pathetic lady cop (centre) could barely be heard through her mask. 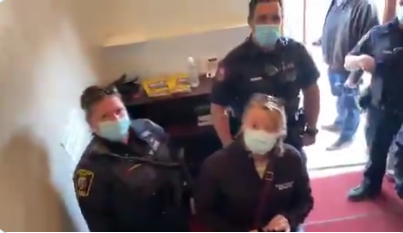 By TONY MOBILIFONITIS
THE global COVID dictatorship coup has taken a sinister new turn with UK and Canadian police invading Easter church services over lack of mask wearing and “social distancing”. Arrogant London cops shut down a Polish church service after invading the pulpit and announcing the gathering “unlawful”.

Police stopped the Good Friday liturgy midstream at Christ the King church, Balham, and threatened fines if congregants remained in the building. The head of the Polish Catholic mission in London and the Catholic church have expressed their strong disapproval with Metropolitan Police.

Artur Pawlowski, the brave and gutsy Canadian pastor of Street Church in Calgary, Alberta, would have none of this and literally drove six armed Alberta provincial cops out of his church with a vocal tirade that left the female leader of the law enforcers protesting timidly. Pawlowski roared at them repeatedly to “get out, get out immediately … you Nazis!”. He simply refused to hear the lady cop’s pathetic attempts to talk through her mask and told them to come back with a warrant. The cops slowly retreated to the street and drove away.

Pastor Pawlowski posted a video of the incident on Facebook on Easter Sunday, which has since gone viral across social media. Another Canadian church, Grace Life Church near the province’s capital Edmonton, also defied the forces of COVID fascism and stayed open over Easter while cops parked near the church, observing the congregation coming and going.

The church pastor James Coates has been jailed for twice violating the Public Health Act and led the service for the third time since his release from jail on March 22. One of the charges has been dropped and a second will be taken to trial in May. Coates also received a $1500 fine for violating bail conditions, which was paid through time served.

All this has happened under the “conservative” provincial government of Premier Jason Kenney, another weak and likely compromised politician held captive by the Gates global medical mafia and Canada’s media network.

Totally unconstitutional and unlawful state government “health orders” have shut down church services across Australia in the name of fighting COVID19, which can be cured with a few days on Professor Thomas Borody’s triple therapy of ivermectin tablets and antibiotics. But we don’t talk about that in government circles unless you’re “a rebel MP” like Craig Kelly, or a few others.

Following the English common law tradition, it is an offence under the Queensland Criminal Code Act 1899 to disrupt a church service. Section 116 of our Constitution also states “the Commonwealth shall not prohibit the free exercise of religion”. But with the so-called pandemic, such common law and constitutional liberties are simply brushed aside – which is exactly what Fourth Reich enthusiast Klaus Schwab and his fascist forces of globalism want. Schwab’s predecessors in the Nazi Party of Hitler’s Third Reich set out to destroy the laws and traditions of the Germany Republic in a similar manner to today’s state and corporate driven COVID terrorism.