If you are concerned by the impacts of climate change, extreme wealth inequality and environmental destruction, then the central banks are not your friend.  Hoping for a future where these problems are tackled seriously? Then the central banks and their enablers are public enemy number-one.  Intergenerational does not get more acute than this.

According to the EU and Forbes, central banks can and should become more involved in key issues like income inequality and climate change.  That sounds like a plan.

The organisations perhaps most responsible for exacerbating inequality, obstructing constructive action on climate change, and perpetuating environmental vandalism are going to ride to the rescue.  Like the fox guarding the henhouse, or the arsonist coming to help put the fire out!  What they should do instead is get out of the way.

In a previous article, I wrote that man’s greatest failing is his inability to understand the exponential function, and that as a result, this sucker – our status quo – is going down.  The ineptitude, inability, and unwillingness of the current crowd in charge to understand the consequences of infinite growth on a finite planet is placing future generations directly in harm’s way.

Is the sucker going to be brought down in a manner over which we have some control, or is the brutal mathematics of our stubborn refusal to adapt going to do it for us?

There is no greater booster of the gap between the haves and the have nots than a bunch of central banks repeatedly bailing out hedge funds, millionaires, billionaires, and zombie companies by printing up trillions of dollars out of thin air and spraying them at the financial system.

And there is no greater facilitator of rampant consumerism, waste, and environmental destruction than those same central bank apparatchiks stepping in to spray low-interest-rate money at consumers, speculators, and markets every time the free market tries to price goods, services, assets and risk properly.

Today’s free money is distorting everything to such a degree that it’s impossible to price anything anymore.

Everything from huge houses, coal-fired power stations, rainforest destruction, pollution, green energy and rampant waste is subsidised. It makes more sense to gamble on bankrupt companies and junk bonds and to boost your company’s share price via buybacks than to perform useful work.  The stuff we need more of, like volunteering or caring, or being genuinely smart and finding solutions to real problems is paid the very least while destructive financial engineering is paid the very most.

It makes no sense to be frugal or to save because interest rates are negative, and so borrowing, consuming, and engaging in profligate behaviour is rewarded while frugality and thrift is punished.  Speculators are encouraged to spew greenhouse gases by building more apartments, more offices, and more shopping malls, even when millions already stand empty.  Any signal from the market that we need to do less of anything is met with a deluge of “do more” free money.

The free money encouraging this appalling state of affairs is created out of nothing by a politburo of unelectable and unaccountable bankers who are loading up the resulting debt and inevitable chaos on our kids’ dime.

How the hell can things possibly be this way?  Well, it has been said it is difficult to get a man to understand something when his salary depends upon his not understanding it.  Jay Powell, the chairman of the very same US Federal Reserve that’s thrown $trillions at market bailouts in 2020 and 2021, just happens to own between $55 and $100 million in stocks.

In Japan the population is declining, having peaked around 2010, so one might expect that this would naturally lead to a reduction in the need to buy, build and consume more stuff.  Not so.  The Bank of Japan, desperate to keep the party going, is a world leader in spewing money and dropping interest rates to zero, chasing the Holy Grail called “growth”.

Now, over a decade after this nonsense started, the central bank owns nearly half of the stock market, buying anything not nailed down with conjured up money to keep assets inflated, and the wealth effect alive, in order to induce consumers to keep on spending.

Governments the world over have feigned action on climate change for decades, and advised by bankers, come up with schemes like carbon and emissions trading as a euphemism for carbon and emissions reduction.  So while we’re all “doing something” about the problem, actual emissions keep going up.  And the more emissions there are, the more trading can be done, and wealth can be shifted from the majority to the minority in the name of climate action.

The poster child for this craziness is an outfit called Tesla, maker of EV cars and a speculator in bitcoin, one of the most energy-hungry speculative assets on the planet.  Tesla, a tiny car manufacturer making less than 1% of the world’s cars is revered and worth more than most of the remaining car manufacturers of the world, combined. 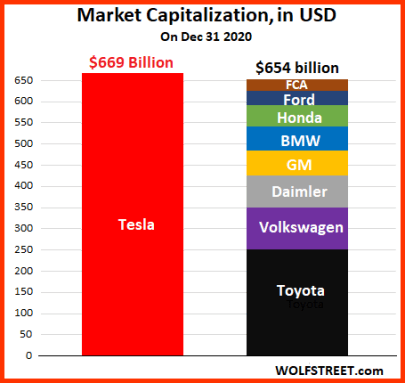 How so?  How did Tesla manage to pull this off, and make its founder pretty much the world’s richest person?  Not by selling cars.  Just about every dime of Tesla’s “profits” come from the sale of carbon credits.  The maker of EV cars is allowed to sell its “we don’t pollute” credits to other carmakers allowing Tesla to trouser “profits” by allowing others to pollute, all because EV cars don’t have exhaust pipes and so apparently do not pollute.

Never mind that most of the EV car is manufactured using polluting technology, and that the batteries are highly toxic, and that the cars are mainly charged using electricity generated from burning coal.  And companies like Tesla, with surging share prices thanks to the endless stream of almost free money sprayed at them by the central banks, don’t even need to run viable businesses, opting instead to raise capital by issuing shares to the hordes of gamblers looking for a quick buck in the casino called the stock market.

Central banks spraying cheap money about in order to “boost the economy” is not consequence-free.  Aside from the many economic distortions caused by too much money chasing too few goods, moral hazard, obscene wealth inequality and the like, there is the simple truth that money is a claim on resources.

Every dollar held by consumers is convertible into stuff, meaning goods and services produced by using scarce energy.  Money created out of nothing ranks equally with money earned by doing hard, useful work.

And money created out of nothing has precisely nothing to do with payment for hard work already performed.  It’s not savings.  It’s a claim, to be paid, somehow, out of future work, future energy use, and future resource depletion. “House prices up by $60,000 in two months?”  Hooray.  That’s $60,000 of claims on resources baked into the Earth’s pile of future IOUs for every single house out there without anybody having to do any real work to make that happen.

I say to the geniuses in charge of the money-for-nothing spigots:  Good luck with that, you fucking idiots.