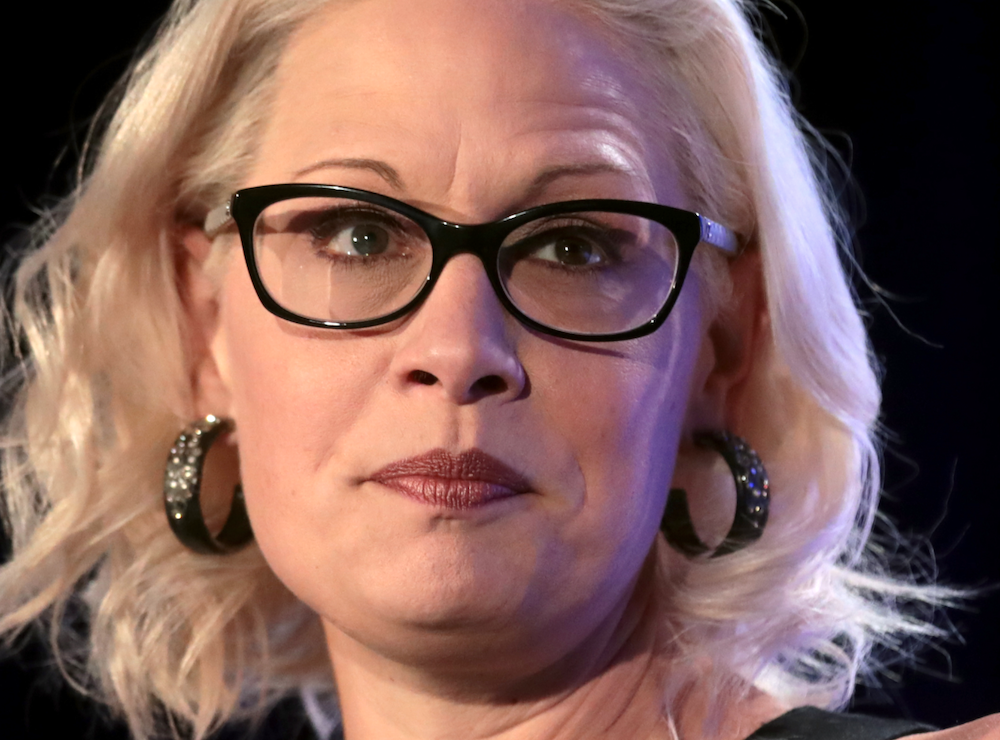 Moderate Democratic Sen. Kyrsten Sinema of Arizona cut against her leftist colleagues Friday afternoon, voting “no” with Republicans and a handful of other Democrats on the progressives’ attempt to include a federal minimum wage increase in the proposed $1.9 trillion COVID-19 spending bill. Not only did Sinema vote not to raise the federal minimum to $15 per hour, but she also gave the measure a literal big thumbs down.

I too like to give a big thumbs-down to federal overreach that would price low-skill workers out of the market.

Videos and gifs of Sinema opposing the bill with a theatric hand motion of disapproval blew up on Twitter, with progressives berating the senator for her “let them eat cake” attitude and “oppressive” vote.

I am insane and zoomed in on another picture of her carrying and in the spirit of Edward R. Murrow-level journalism I’m humbled to announce in a parody of white feminism Krysten Sinema [sic] voted against a $15 living wage while carrying a giant Lululemon bag. pic.twitter.com/BCHVCbpvR2

A vote against a $15 minimum wage is a vote to keep people in poverty.

Sinema just taunted close to a million of her constituents with this no vote after walking into the chamber with a big piece of cake.

Sinema said “let me put a little pizazz in my fuck the poor”pic.twitter.com/KqaT4prnG8

The senator has expressed that she actually supports minimum wage increases, having backed it in her home state in the past, but correctly says those debates should be “separate from the COVID-focused reconciliation bill.”

Frankly, however, Sinema was right today in the Senate chamber, however bad the resulting GIF might be for her political career. We all should be giving a big thumbs down when micro-managerial federal lawmakers, completely insulated from the destructive wage rules they implement and the working Americans they purport to represent, try to ram politically expedient bills through Congress regardless of the economic casualties. Policies that are good for generating leftist buzzwords about oppression and poverty but are actually a detriment when it comes to helping people overcome those things should be rejected, regardless of the political capital on the line.

Honest-minded people looking at the oodles of data and the rules of incentives can conclude that minimum wage laws hurt our most vulnerable workers, those who lack skills or experience, by pricing them out of the marketplace. This is in part because those laws increase their wages without increasing their output, making them far less employable as they compete with higher-skilled workers.

As Thomas Sowell rightly observed about workers and wages: “In short, no one is employable or unemployable absolutely, but only relative to a given pay scale.” As wages rise under coercion from Congress, the least skilled among us become legally unemployable, save for employers’ charity.

Democrats complain about the COVID-related economic downturn but then propose harebrained minimum wage policies that would screw over suffering small business and their employees. They complain about college debt but then introduce legislation that prices high school students out of low-skill job opportunities, increasing the barriers to entry. They scoff and insist that businesses can pass the costs of wage increases onto consumers without pausing to think about who exactly those consumers are, the same Americans they say are living in poverty.

You might not like the optics, but Sinema was right. We all should give a $15 federal minimum wage a big thumbs down.