While the media and our power-obsessed managerial class drive much of this fear, it seems many citizens of these states that are now liberated from unconstitutional orders are also leaning into the fear and using it to shame their fellow citizens. They sneer on social media, making baseless claims about how they would be safer “if we could just wait a little longer,” or why “now is not the time to be lifting restrictions.” “No need to throttle back until this thing is really under control,” one fellow Texan wrote on Facebook.


So the question is, if it’s not safe now, then when? When will it be acceptable, according to science, to breathe unfiltered air? What will it take for us collectively, as a society, to believe the virus is “under control”?

Is it when the entire country is vaccinated? Half the population? That will take years. When we “flatten the curve”? We’ve done that twice now in Texas. When we prevent our hospitals from being overwhelmed? We’ve done that twice now too. The pop-up hospital at Dallas’s Kay Bailey Hutchison Convention Center was never used. Maybe when the CDC says everything is OK? The CDC advises you to not eat raw cookie dough or rare steak, as Robby Soave points out.

The logic of those in favor of mask mandates is that without them, people will die. The data, however, does not support this logic.

This is not to argue whether the science of mask-wearing works, but rather whether mask mandates actually make a difference in community spread. A comparison of COVID-19 numbers in states with mask mandates to states without mask mandates shows that this supposedly “life-saving” policy does not make a measurable difference. Florida never had a mask mandate, yet when adjusted for population, Florida has had fewer cases and deaths than New York or California, which are both under mask mandates and lockdown orders. 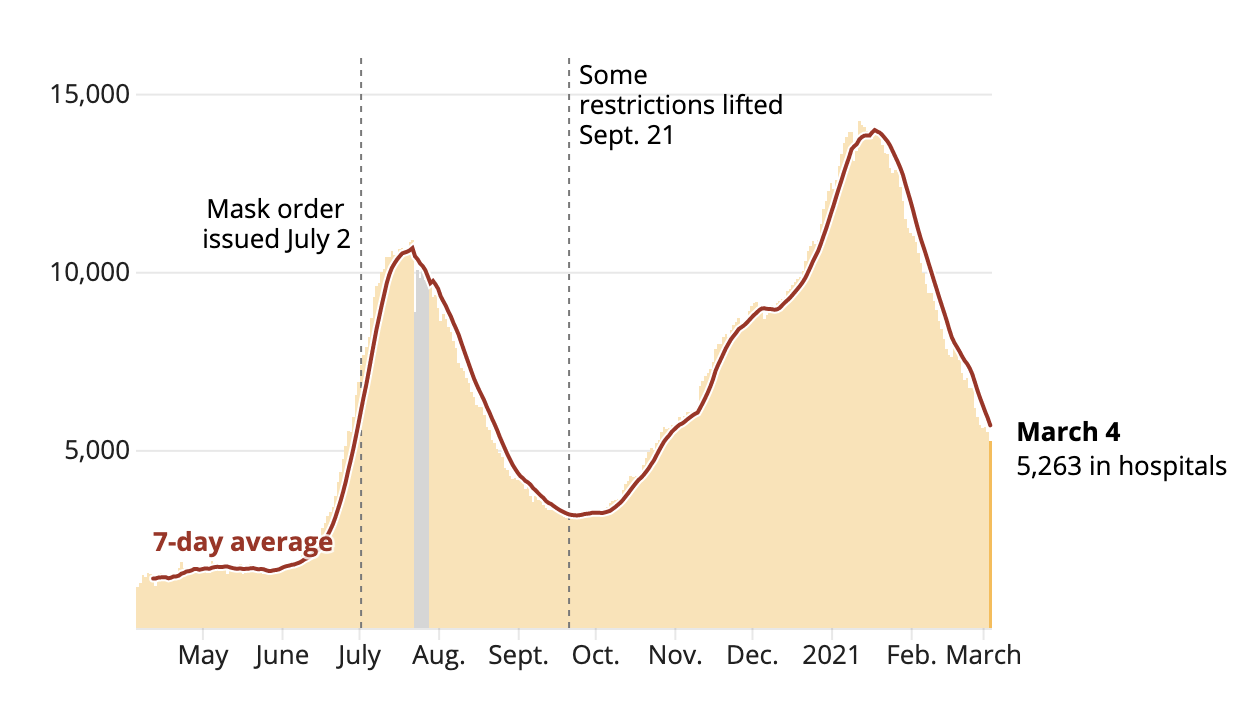 Did the mask mandate flatten the curve? You could make that case if the numbers had plateaued after the first spike, but they didn’t. There was an even greater spike seven months into the mask mandate.

“But now cases will definitely spike again without mask enforcement,” the mask tyrants argue. Maybe they will, but there’s no data to prove that is or isn’t because the government isn’t requiring face coverings. Again, see Florida versus California.

As of March 4, Texas is nearly back to the number of hospitalizations it had when Abbott issued the mask mandate last summer. If this unconstitutional policy didn’t make a difference last summer, or this winter, then when? The politicians and the media and fear-mongering neighbors will not answer this question because their answer is “never.”