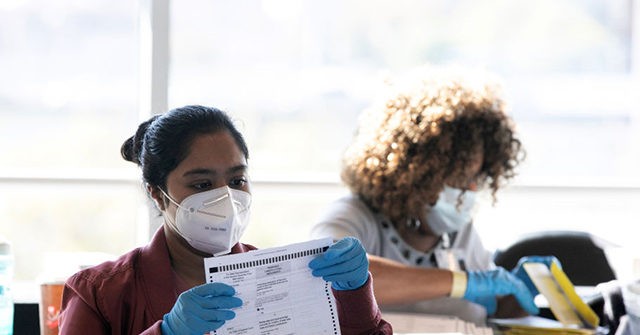 “[H.R. 1]  basically codifies everything that was irregular or outright wrong or the opportunities for fraud during last year’s election and makes it the law of the land,” Rokita said in an interview on SiriusXM’s Breitbart News Daily with host Alex Marlow. “It takes out the balance between integrity and accountability and access to polling places.”

Rokita explained, “H.R. 1 makes photo ID illegal in the United States. Meanwhile, it mails out live ballots to everyone on the voting list — alive or dead — and it makes it much more difficult for states to take dead people off the voting rolls, to take people who moved away off of voting rolls.”

Rokita noted that H.R. 1, named the For the People Act, would also nationalize legalize ballot harvesting and extend voting deadlines for ten days after an election.

“[H.R. 1] says you can still turn in that mailed-out ballot — or your ballot harvester can, the third party that’s going around collecting them — up to ten days after the election. So if you get a close election, you can still have harvesters out there collecting — possibly, likely — fraudulent ballots and turning them in because you really don’t have to do anything, and you have to accept these ballots.”

Marlow assessed, “There’s no sane Western country that does this, is there?”

Rokita replied, “There’s no same third-world country that does this. Everywhere you go in the world, a photo ID is required [to vote]. Everywhere you go in the world, it’s by vast majority in-person voting because that’s how you really can help maintain one-person-one-vote because the person actually appears before you. We’ve had reasonable exceptions in this country, like if you’re invalid, you can’t get to a polling place, [or] even if you planned to be outside the jurisdiction on the election day, you can attest to that fact and get an absentee ballot.”

“Mail-in balloting is where the most fraud occurs, and now they’ve thrown out those thin guard rails,” Rokita added. He highlighted the Constitution’s decentralized framework for national elections.

“The one thing that you can count on and why our Constitution is so brilliant is that it preserves that one-person-one-vote, at least to the states, the idea of how they’re going to do the time, manner, and place of an election, not some central government,” Rokita remarked.

Rokita concluded, “If the people don’t think and don’t have reasonable confidence backed by facts and observation that they still are in power — that they have the power through the electoral process to put in place who they want — then this country is lost.”

Rokita joined 19 other state attorneys general in a letter to congressional leaders laying out “constitutional vulnerabilities” within H.R. 1.