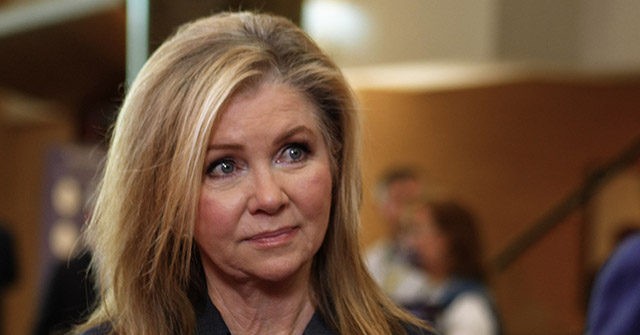 “It is very problematic because we have to realize China is not our ally,” Blackburn said when asked if Biden’s handling of his first phone call with Chinese dictator Xi Jinping was productive. “They are our adversary. They are intent on global domination. The human rights violations they are carrying out against the Hong Kong freedom fighters, the Tibetans, and the Taiwanese, the genocide they are conducting against the Uyghurs, the Muslim minority population, where they’re putting them into slave labor and internment camps. They want to annihilate that population. When it comes to the economy, look at what they’re doing. They practice what is called rob, replicate, and replace, which is they steal your intellectual property that you’re manufacturing over there, they manufacture it at a lower price point replicating it, and then they replace you in the market destroying American companies and destroying American jobs. We’ve talked about their soft propaganda with the Confucius Institutes and the Confucius classrooms and the sister city programs. Then you look at what they’re doing with Big Tech. They’re so cozy with Big Tech. Big Tech needs their supercomputing chips and microprocessors, so they never block, throttle, shadowban, demonetize, deplatform the Chinese Communist Party who is putting people in jail if they speak against the Chinese Communist Party.”


Biden’s call with Xi included references to the human rights issues with regard to the Uyghur Muslims, but Biden later admitted in a CNN townhall he was just being perfunctory with the topic during the call. That lack of seriousness from Biden in response to the CCP’s behavior, Blackburn said, is dangerous.

“They’re going for domination,” Blackburn said about China, adding that through a number of fronts the CCP is attempting to influence American culture in nefarious ways.

“With Confucius Institutes and on our campuses and in our classrooms and with investing in Hollywood movie companies, yes China is very much involved in trying to invest in America. But they play by a different set of rules than U.S. companies play by,” she said. “We need the Biden administration to say ‘you know, Donald Trump was right about some of this.’ But if they are not going to do that it is going to be up to the people of this country to say we have to continue the Trump policies.”

Blackburn’s comments came during an exclusive interview with Breitbart News at the Conservative Political Action Conference (CPAC) here, the mega-gathering of conservatives hosted annually by the American Conservative Union (ACU). Blackburn also argued that a number of Biden actions during the early days of his presidency amount to a broad gift to China, on everything from energy to the economy to even Biden’s personnel decisions.

“This is where people should be looking: the Biden executive orders, and really paying attention to what he is doing there,” Blackburn said. “The majority of his executive orders have been favorable to who? China. You look at the Keystone pipeline. Who gets that crude from Canada? China. You look at the Paris Climate Accords. That is not going to help American workers. It is going to empty out 1.4 million American jobs. When you talk about making solar panels, those jobs aren’t in the United States. There are 10 companies on the face of the earth making solar panels. Eight of them are in China. When you talk about wind turbines, where are those made? They are made in China. When you talk about removing sanctions, you’re talking about freeing up China. When you talk about that we’re going to change some of our trade policy, you’re talking about being favorable to China. People need to pay attention to this—and then look at the people he is putting forward to be in his cabinet and in the leadership positions in his administration. They’re radical.”

Blackburn pointed in particular to Biden’s U.S. ambassador to the United Nations, Linda Thomas Greenfield, who gave a paid speech to the Confucius Institutes in which she praised the CCP’s destructive Belt and Road Initiative activities in Africa.