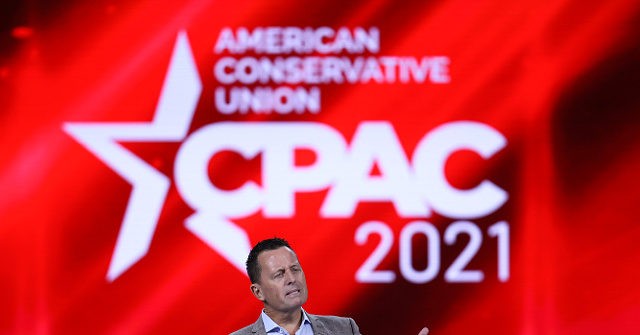 “In America, I think there’s a real value in seriously considering term limits for our elected officials,” Grenell said to loud cheering.


“Many who have become more ingrained in Washington than in the fabric of their own hometowns. This is a fight between the insiders and outsiders, between Washington, DC, and the rest of America,” he said.

Grenell then pivoted to California, heightening speculation he may run against California Gov. Gavin Newsom.

“Of course if things get really bad with elected officials, there is always the option to recall them,” he said. “If you want the best case possible for a recall campaign, take a look at my home state of California.” He added:

California used to be Reagan country. The shining example of business innovation and middle class success. But now when you think of California, you think of out of control wildfires, of rolling blackouts, of schools still closed, of shuttered businesses, of bans on fracking and wealthy people jumping the vaccine line.

He blasted Newsom for purchasing $1 billion in masks and other personal protective equipment from a Chinese company “when American companies with the same equipment were based in California.”

“In my three decades in American politics, I have never seen a better case for a recall than there is right now in California,” he said.

He then hinted at a potential run against Newsom.

“And of course if a public official is still failing to deliver on their promises and if you can’t limit their term or recall them in time. There’s always one other option. You can run against them yourself,” he said.

Grenell was the first openly-gay member of a presidential cabinet. He grew up in California and Michigan. He served as the spokesman for the U.S. Mission to the United Nations during the second Bush administration.

He was a staunch defender of former President Donald Trump and the America First doctrine.

At CPAC, he declared the America First doctrine — which gave Americans more of a say in U.S. foreign policy — “here to stay.”

“Previous administrations have tried to limit the American people’s participation in deciding what kind of foreign policy this country should pursue. They delegated it to unelected technocrats and career bureaucrats with the help of lobbyists and others with financial interests overseas,” he said.

“The overclassification of government documents. The over-reliance of special operations forces. The over-expansion of new and overlapping federal agencies, and the over-politicized nature of intelligence all helped to take national security off the table as a matter of democratic debate,” he said.

He also called out European nations reducing their contributions to NATO while building gas pipelines with Russia and making deals with China.

He said the America First doctrine’s electoral popularity ensures it does not just belong to one person or party.

“America First is now positioned to guide our country through the trials and tribulations of the next generation,” he said.