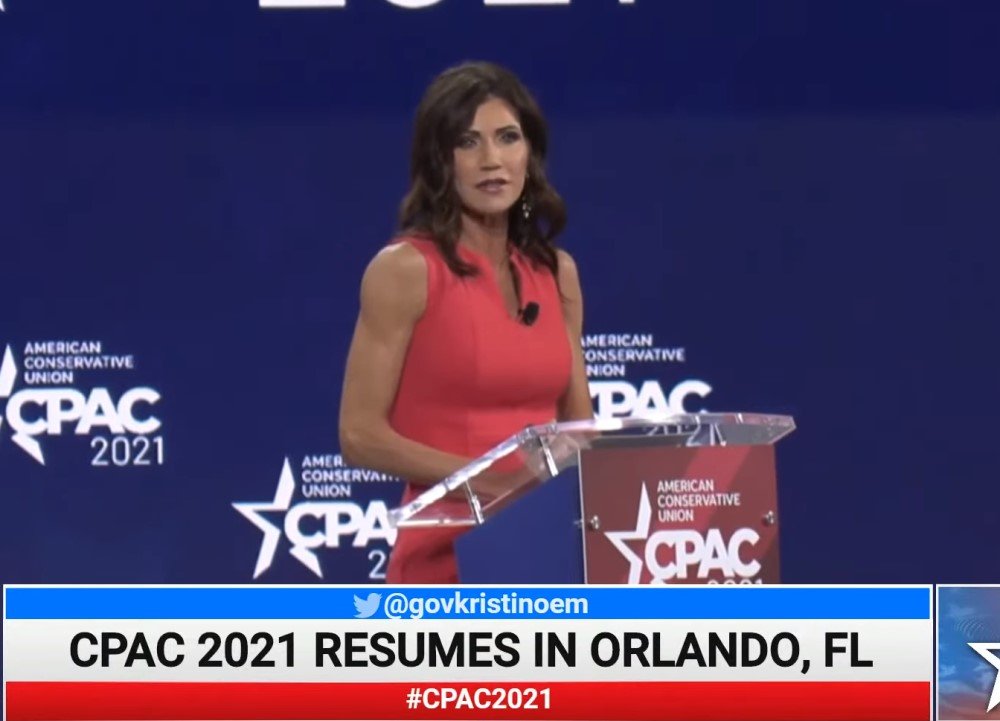 On Saturday at the Conservative Political Action Conference in Orlando, Fla. South Dakota Gov. Kristi Noem spent a large portion of her 26-minute speech—centered on the COVID-19 lockdown response—discussing the legacy media’s perpetual malfeasance and biases in coverage.

“Many in the media criticized South Dakota’s approach. They labeled me as ill-informed, reckless and even a ‘denier.’ Some even claimed that South Dakota is ‘as bad as it gets anywhere in the world’ when it comes to COVID-19—that is a lie. The media did all of this while simultaneously praising governors who issued lockdowns, mandated masks, and shut down businesses—applauding them as having taken the ‘right’ steps to mitigate the spread of the virus,” Noem said.


“At one point, I appeared on George Stephanopoulos’s Sunday show,” the governor continued. “He had just wrapped up a segment with New York Governor Andrew Cuomo. Where he asked Cuomo to give me advice on how to deal with COVID.  Now seems like a good time to remind everyone of what Governor Cuomo was doing in New York.”

As illustrated by Noem in her CPAC speech, the media hailed New York Gov. Andrew Cuomo as a saint early in the virus, even awarding him an Emmy Award for “masterful” COVID-19 daily briefings.

“The governor’s 111 daily briefings worked so well because he effectively created television shows, with characters, plot lines, and stories of success and failure,” Bruce L. Paisner, the International Academy president, said in a statement in Nov. “People around the world tuned in to find out what was going on, and New York tough became a symbol of the determination to fight back.”

Ironically, it turns out Paisner is spot on. Cuomo’s briefings were entirely orchestrated by a left-wing media seeking to construct the governor as an effective leader he demonstrably did not prove to be. Cuomo is currently being investigated by the federal government for his mishandling of the pandemic, notably sending an estimated 9,000 COVID-19 infected seniors back to nursing homes. A 76-page report in Jan. authored by New York Attorney General Letitia James showed that more than 15,000 elderly citizens died in nursing homes in New York.

“We don’t have the media on our side,” Noem said. “Conservatives must be smarter than progressives. We must know our history. We must know what works and what doesn’t work. We must think through issues.”

Noem noted South Dakota’s thriving economy with a 3 percent unemployment rate in January, according to the U.S.  Bureau of Labor and Statistics. That’s the lowest in the nation, tied with Nebraska.

“Again, in South Dakota we did things differently. We applied common-sense and conservative governing principles. We never exceeded our hospital capacity. And our economy is booming,” Noem said. “We have the lowest unemployment rate in the nation. We are number one in the nation for keeping jobs, keeping businesses open, and keeping money in the pockets of our people.  The people of South Dakota kept their hours and wages at a higher rate than workers anywhere else in the nation. And our schools are open!”