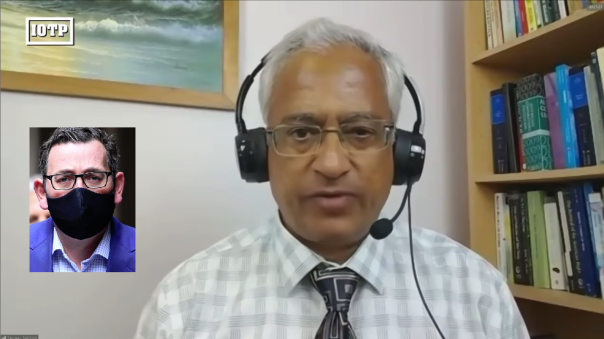 
By TONY MOBILIFONITIS
CAN the wrecker of Victorian small business and lives, Premier “Dictator Dan” Andrews, be made accountable for his misdeeds in an international court?

Long-serving Victorian government economist Sanjeev Sabhlok aims to find out and has lodged a complaint in the International Criminal Court against Andrews for “crimes against humanity” under his insane and lawless state lockdowns.

Sabhlock says there is not a single peer reviewed paper or document – official or unofficial – to support lockdowns. He says the established Australian pandemic management policy was the same as the so-called “Swedish model” that we were led to believe was the exception.

The existing policy was suddenly switched to become the lockdown tyranny imposed by Andrews and other premiers. Sabhlock says lockdowns cannot be justified by science even under a Spanish flu pandemic. He says they are in fact dangerous and that is a major reason he filed the ICC complaint.

Sabhlok resigned in protest from the Department of Treasury and Finance in September 2020 after being asked to remove social media posts critical of the Chief Health Officer Brett Sutton and the government’s continued restrictions on people’s liberties.

Sabhlok, who served in Victoria’s public service for 20 years, 15 in the Treasury as a senior economist, and was a high-level public servant in India previously, accused Sutton of “massively exaggerating and misleading the entire public and politicians”. Cairns News believes it is an accusation that could be brought against all chief health officers across Australia who have become virtual dictators, apparently on behalf of global pharma and the Gates-Rockefeller mass vaccination, population control scam.

The Rockefeller Foundation floated the idea of a dictatorial government model in its May 2010 report Scenarios for the Future of Technology and International Development, in cahoots with the Global Business Network (GBN) of futurologist Peter Schwartz. GBN is part of the global health combine pushing vaccines.

The report’s first scenario, “Lock Step”, describes a world of total government control and authoritarian leadership in a future where a pandemic allows national leaders to impose rules and restrictions that would remain after the pandemic faded. Could string pulling by these powerful interests have facilitated the authoritarian pandemic response seen globally?

Sabhlok, in an interview with the Australian YouTube program In The Interests Of The People, said that between March 20 and 27th last year “something really big happened to Australia”. “The national cabinet completely abandoned all its plans and declined to do any of the risk-based approaches that were actually embedded in our own plans, which is what I explained in my complaint to the International Criminal Court,” he said.

In October Sabhlok wrote an open letter to the Victorian Treasury secretary David Martine asking him to provide all the relevant documents he provided the government relating to risk-based approaches, proportionality and cost benefit options in the pandemic management. He said if the Treasury didn’t do that, they didn’t perform their basic, fundamental role.

“We’ve had significant public service failure, we’ve had groupthink – so essentially what I’m saying is we should have a Royal Commission … that will look at the original Cabinet documents, we’ll look at the supporting documents … the various claims made by people.”

He said the only documents he had so far were those published in the Parliament and included the Chief Health Officers memos “which were really very shoddy – I cannot imagine a more pathetic set of documents that would determine public policy in Victoria.”

Sabhlok said he had studied a number of plans across the world including Sweden “who followed exactly what is in our plan, which is basically called flattening the curve, making sure the health system remains within capacity, we have voluntary social distancing, we monitor the people who are sick, we ask them to stay at home, we create management plans for businesses so that businesses can operate in a safe manner.

“That would have ensured we would have had a bit of a downfall in the economy – a bit of a minor recession I suppose – but we would have recovered very quickly without any of this massive unemployment and other issues we have faced. And of course, I’m not just talking unemployment I’m talking the mental harms, the tortures, the lockdowns and so on…. But there’s been a complete shift between the 20th and the 27th of March. We abandoned Australia’s well-established regulatory practices.”

Sabhlok says the three major “threads” in his study of the pandemic response are China, who were heavily involved in Italy through Belt and Road initiatives, the UK scientist Neil Fergusson who released bad modelling of the pandemic and the WHO chief Tedros Adhanom “who calls himself a doctor, which is very unfortunate because he’s not and he’s essentially a communist politician”.

Sabhlok said the role of politicians was also part of his complaint to the ICC because once the panic was created by the media, the politicians had strong incentives to follow the herd and reap only the political gains, “which is what Dan Andrews has been enjoying”.