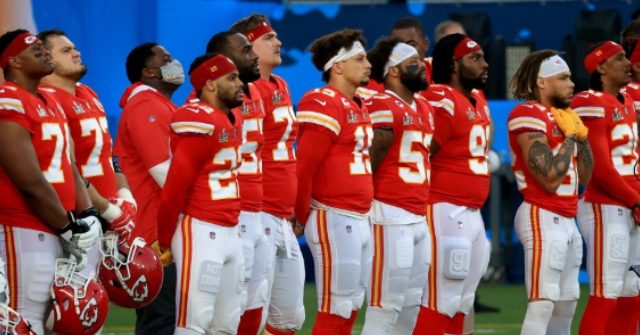 Hitmaker Alicia Keys was tasked with a virtual performance of the 121-year-old spiritual song that has come to be known alternately as the “black national anthem” after being introduced in 1899 for Abraham Lincoln’s birthday. The poem read in 1899 was set to music in 1900.

Beautiful. Alicia Keys ‘Lift Every Voice and Sing.’ Both teams lined up in endzones #SBLV pic.twitter.com/WMgUVwOv4X

Keys sang the song to kick off the season, as well.

Both the Tampa Bay Buccaneers and the Kansas City Chiefs took the field during Keys’ performance on the jumbotron, but the teams returned to the locker room immediately afterward.

The league chose the “black national anthem” for both Opening Day for the 2020 season and the Super Bowl as part of a national reckoning over race in the wake of the death of George Floyd, who died in the custody of the Minneapolis police.

The early segments of the game also featured a poem by Poet Amanda Gorman that honored teachers, military veterans, and frontline healthcare workers, the AP reported.

“Gorman, who graduated from Harvard University last year, captivated Americans with the recent recitation of her poem on national unity at President Joe Biden’s inauguration,” the AP said.