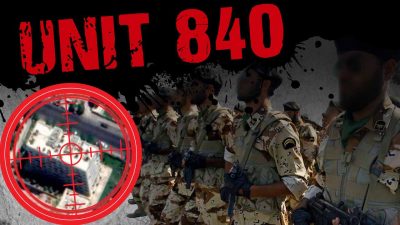 Foreign operatives raided the headquarters of the Iranian Quds Force’s Unit 840 in the hearth of Damascus, Israeli sources claim. The Israeli news outlet Intelli Times reported on January 28 that an unidentified “Western intelligence agency” allegedly carried out the covert operation four months ago.

A video of the operation shows the agents seizing documents inside the Iranian headquarters and holding down one of the Syrian guards. Syrian activists noted that the alleged “Western agents” in the video spoke fluent Arabic with a distinctive Syrian accent.

Last November, the Israeli Defense Forces accused the Unit 840 of planting three explosive devices along the Israel-Syria contact line in the occupied Golan Heights. Tel Aviv responded to the operation with a series of airstrikes on central and southern Syria.

Intelli Times said that the Unit 840 is commanded by Yazdan Mir, also known as “Sadir Baqiri.” The leader has two aides, Mukhtabi Hashimi and Mohssin Mohamad. The Israeli side insists that the unit is training personnel in Syria to launch attacks against “Western targets.”

The Israeli report is highly questionable. Nevertheless, the Israeli intelligence carried out similar daring operations in Lebanon, Syria, Iran and many other countries in the past. The report itself could be considered as a message to Syria and Iran amid the growing tensions in the region.