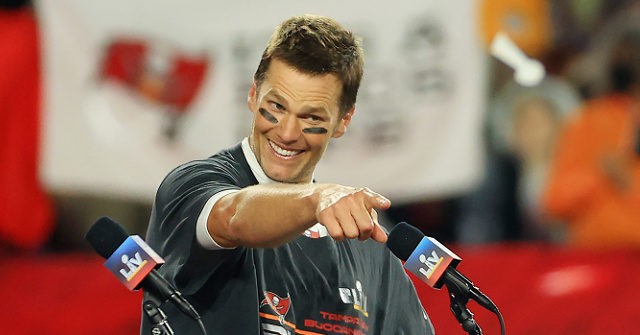 Democrat President Joe Biden lost again Sunday night when his pick for whom he would want to receive a pass from, Chiefs’ Quarterback Patrick Mahomes, lost the Super Bowl to the Buccaneers’ Tom Brady in a blowout in Tampa.

In a pre-Super Bowl interview with Norah O’Donnell of CBS News, Biden — the just-inaugurated 46th president of the United States — said he once dreamed of playing professional football.

“I had wild dreams,” Biden said. “They weren’t to be president; they were to be a flanker-back in the NFL.”

Biden declined to say who he wanted to win the game but did say he would rather catch passes from Mahomes than Brady.

“Obviously, Brady is a great quarterback,” Biden said. “Mahomes seems like he has a lot of potential. I’d probably take a shot with the young guy who (we) didn’t expect as much from.”

Delighted @NorahODonnell to President Biden: “Many people may not know you were once a pretty good receiver yourself back in the day. As a former receiver, which quarterback would you rather have throw to you? Tom Brady or Mahomes?” #SuperBowl pic.twitter.com/nXAskf89kP

USA Today’s Charles Goldman wrote that despite Biden not picking which team would win, “his inclination to choose Mahomes over Brady is all you need to know” in terms of Biden’s thoughts going into the game.

While Biden clearly favored Mahomes in the Super Bowl, Brady and the Bucs crushed his Chiefs 31-9. The win is Brady’s seventh Super Bowl victory, even further cementing his legacy as the greatest NFL player of all time.

Some, like former White House press secretary Sean Spicer, mocked Biden for the comments as it became clear Brady was heading to yet another victory:

This was Brady’s first year with the Bucs after playing his entire career — and winning six other Super Bowls in nine total appearances — with the New England Patriots. After a falling out with the leadership of the Patriots after last year’s season, Brady moved to the Bucs and joining him were fellow former Patriots Tight End Rob Gronkowski and Wide Receiver Antonio Brown.

But the Patriots did congratulate their former star quarterback after the win:

Congratulations to the greatest of all time.

During the 2016 presidential race, Brady’s locker displayed a “Make America Great Again” hat. He also has been longtime friends with now-former President Donald Trump, even though he did not ever formally endorse Trump’s candidacy.