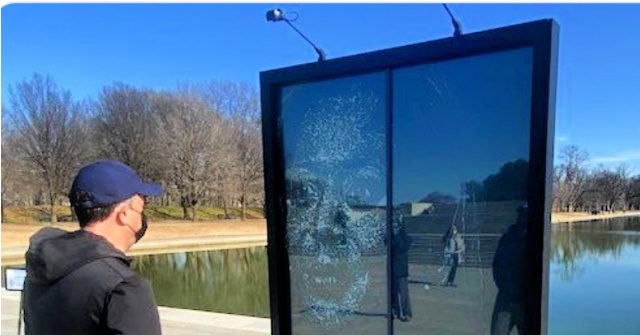 A shattered glass portrait of Vice President Kamala Harris memorializing her career was erected this week on the National Mall in Washington, DC.

Groups looking to memorialize Harris’ achievement of becoming the nation’s first black and Asian American woman to serve as vice president unveiled the artwork Thursday in front of the Lincoln Memorial, the Hill reported.

Harris’s husband, Douglas Emhoff, tweeted a photo of himself with the portrait on Friday afternoon, describing it as “incredible”:

I had to see for myself this new art installation honoring @VP Kamala Harris. It’s incredible.#glassceilingbreaker pic.twitter.com/KRrp3eYyrk

“The project was commissioned by creative agency BBH New York, which hired Swedish artist Simon Berger,” the Hill article said, adding that Harris reportedly knows about the portrait, but it is not known whether she will make a trip to view it.

The installation will remain at its location until Saturday evening when it will be transported back to New York.

“I’m completely over the moon and so excited to support her leadership and support their vision for how we transform healthcare, as well as sexual reproductive healthcare,” she stated.

National pro-life leaders declared former President Donald Trump to be the most pro-life president in history, and Joe Biden and Harris to be the “most pro-abortion presidential ticket in history.”

Harris especially has held close ties to Planned Parenthood throughout her political career.

“The spending package passed at 5:35 a.m. after a full night of debate, pushed forward by Democrats looking to force through a budget reconciliation deal without the support of Republicans,” Breitbart News reported.