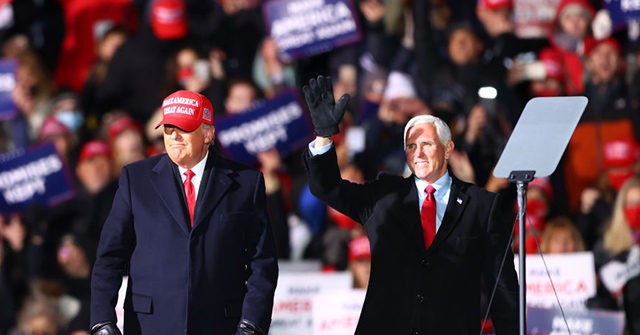 The document Politico published on Monday and touted as “Trump pollster’s campaign autopsy” is not an “autopsy” of former President Trump’s 2020 campaign at all, but is instead an analysis by former Trump campaign polling firm Fabrizio, Lee & Associates of exit polls conducted in ten states by AP VoteCast and the National Election Pool (NEP).

The ten states consisted of two groups of five, according to the analysis:

Former President Donald Trump has blamed the election results on unfounded claims of fraud and malfeasance. But at the top levels of his campaign, a detailed autopsy report that circulated among his political aides paints a far different — and more critical — portrait of what led to his defeat.

The post-mortem, a copy of which was obtained by POLITICO, says the former president suffered from voter perception that he wasn’t honest or trustworthy and that he was crushed by disapproval of his handling of the coronavirus pandemic. And while Trump spread baseless accusations of ballot-stuffing in heavily Black cities, the report notes that he was done in by hemorrhaging support from white voters.

The 27-page report, which was written by Trump chief pollster Tony Fabrizio, shows how Trump advisers were privately reckoning with his loss even as the former president and many of his supporters engaged in a conspiracy theory-fueled effort to overturn the election. The autopsy was completed in December 2020 and distributed to Trump’s top political advisers just before President Joe Biden’s Jan. 20 inauguration. (emphasis added)

The two main claims of the Fabrizio, Lee & Associates analysis are that slippage in Trump’s support among white voters and voter perceptions that he did not properly handle the coronavirus pandemic resulted in losses in the five key “Flipped” states–which together had 73 electoral college votes–turned his 2016 Election Day Electoral College 306 to 232 victory into a 2020 Election Day Electoral College loss of 232 to 306.

As in 2016, the margin between victory and loss for the two presidential candidates in 2020 was incredibly narrow. While the Fabrizio, Lee & Associates ten state exit poll analysis of the 2020 presidential election accurately reflects the views of the respondents to the exit polls included it its sample, it stands in contrast to an actual “campaign autopsy”– the 100 page report on the failed 2012 Romney presidential campaign released by the Republican National Committee (RNC)  in March 2013.

That report was put together by seasoned Republican campaign professionals who had not been part of the 2012 Romney campaign, and addressed key elements of that campaign well beyond voter perceptions of the Republican presidential candidate in ten states, as Breitbart News reported at the time:

The methodology of the 2013 RNC campaign autopsy was described in the document itself:

As requested by Chairman Priebus, we made recommendations in the following areas:

We met with, or spoke to more than 2,600 people, both outside Washington and inside the Beltway. We spoke to voters, technical experts, private sector officials, Party members, and elected office holders. We sought out Republicans from all ideological backgrounds. We convened in-depth focus groups with voters in Iowa and Ohio who used to call themselves Republicans, but who left the Party because they thought we weren’t conservative enough or because we were too conservative. We conducted a poll among 2,000 Republican Hispanic voters. We surveyed political practitioners at the state and national level and also conducted a survey of GOP pollsters. We consulted with independent pollsters. And more than 36,000 individuals participated in our online survey to determine priorities and to identify additional volunteers for the party.

One key area of campaign mechanics addressed in the 2013 RNC campaign autopsy –early and absentee voting programs–stands out  as a prophetic warning to the GOP, given how Democrats in 2020 managed the dramatic shift in the method of voting towards vote by mail–through controversial methods whose legality has been questioned- in the five key “Flipped” states in 2020 (Arizona, Georgia, Michigan, Pennsylvania, and Wisconsin) to their advantage:

The number of early and absentee voters continued to increase this [2012 presidential election] cycle, and Election Day voting continued to fall. In 2004, 76 percent of the electorate voted on Election Day; in 2012, 65 percent voted on Election Day, a decrease of 12 percent in eight years. The Democrats successfully front-loaded many of their votes this cycle, expanding their early vote and absentee reach and giving them a much better picture going into Election Day of who had already voted and who remained a target for their efforts. They continued to expand their advantage in early voting, and this cycle they ran a much more focused effort on absentee voting, which helped them close their margins.

This trend in early, absentee, and online voting is here to stay. Republicans must alter their strategy and acknowledge the trend as future reality, utilizing new tactics to gain victory on Election Day; it is imperative to note that this will be a critical cultural shift within the Party. Additionally, early voting should be factored into all aspects of political strategy, messaging and budgeting so that we understand that we are no longer working in an environment where 72-hour GOTV efforts will determine an election outcome. And again, we must test and retest what will work best with respect to contacts and persuasion of early and absentee voters.

The Democrats’ effort on maintaining a year-round presence with field operations, and investing in infrastructure to support early and absentee vote programs, had a significant impact on the outcome of the election.

We have to match and exceed this effort in order to ensure victory in future midterm and Presidential-year elections.

The Fabrizio, Lee & Associates ten state exit poll analysis of the 2020 presidential election did not address any of the key elements of political operations that a robust “campaign autopsy” typically addresses, specifically how the Democratic Party’s domination of vote by mail far surpassed the Republican advantage in traditional Get-Out-the-Vote (GOTV) efforts.

McLaughlin & Associates, a polling firm that worked for the Trump campaign in both 2016 and 2020, addressed those issues head on in a 2020 post-election poll conducted between November 2 and November 3 of 1,000 actual voters around the country with a 3.1 percent margin of error.

The biggest change in voting method since 2014 has been in the explosive growth of early voting by mail as a percentage of all votes cast, which increased from 14 percent in 2014 to 20 percent in 26 percent in 2018 and then to 40 percent in 2020.

A new means of voting by mail was introduced into the national election of 2020–through controversial and legally questionable means in several states–voting by mail by placing ballots in dedicated drop boxes placed in certain localities rather than depositing those ballots in approved U.S. Postal Service facilities.

(Note: A December 2020 report by the MIT Election Data and Science Lab concluded that 46 percent of all votes cast in the 2020 presidential election were early vote by mail)

Significantly, the McLaughlin & Associates post-election poll found dramatic differences in support for the two presidential candidates based on the method of voting used.

In Arizona, 2.4 million early vote by mail ballots were cast, or 72 percent of the 3.3 million total votes cast.

In Georgia, 1.3 million early vote by mail ballots were cast, or 26 percent of the 5 million total votes cast.

In Michigan, 2.8 million early vote by mail ballots were cast,  or 51 percent of the 5.5 million total votes cast.

In Pennsylvania, 2.6 million early vote by mail ballots were cast, or 37 percent of the 6.9 million total votes cast.

In Wisconsin, 1.2 million early vote by mail ballots were cast, or 37 percent of the 3.2 million total votes cast.

You can find the state by state data for early vote by mail in the 2020 presidential election here.

The Fabrizio, Lee & Associates analysis of that data did not indicate if it included voting behavior based on method of voting.

Notably, in May 2020 Fabrizio, Lee & Associates conducted a poll for the left wing group Secure Democracy, the results of which were reported exclusively by Axios in a story titled “Trump pollster finds strong demand for expanded absentee voting.”