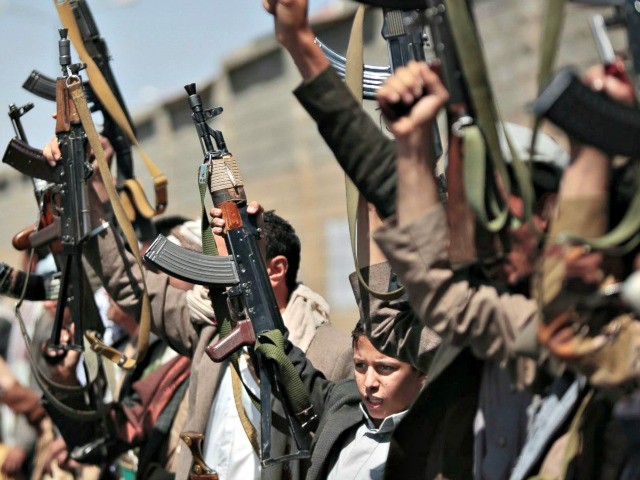 President Joe Biden is de-listing the Houthi rebels of Yemen as a terrorist organization, despite the fact that the group attacks civilians, considers the U.S. an enemy, and is armed and funded by Iran.

As Breitbart News has previously reported: “The Houthis are a jihadist organization whose slogan is ‘God Is Great, Death to America, Death to Israel, a Curse on the Jews, Victory to Islam.’”

The Biden administration announced the move on Friday, ostensibly to allow humanitarian aid to reach Yemen. It follows an announcement by National Security Advisor Jake Sullivan that the U.S. was ending its support for Saudi Arabia’s war in Yemen on behalf of the legitimate government.

The Houthis launched the war in 2014. Iran backs the rebels, partly because control of Yemen gives Iran a strategic position across the Bab el Mandeb Strait from U.S. forces that are stationed in Djibouti on the Red Sea. Both sides in the civil war have committed atrocities.

The move is Biden’s latest slap to U.S. allies in the region — and an apparent attempt to appease Iran, which the Biden administration hopes to entice back to the negotiating table.

The Houthi rebels are armed and trained by Iran’s overseas terror corps, the IRGC and Hezbollah. They fire missiles at civilians and American sailors while chanting ‘Death to America.’ And they’ve plunged Yemen into a protracted war that has immiserated the Yemeni people. If that’s not terrorism, I don’t know what is. President Biden and Secretary of State Blinken may foolishly believe that a gesture of goodwill toward the Houthis will lead to peace, but the rebels have ignored the peace process for years while refusing to honor ceasefires. The Biden administration is repeating the deadly errors of the Obama administration by appeasing Iran and refusing to call terrorists by their name.

The Obama administration backed Saudi intervention in Yemen, but Democrats began to oppose the war once President Donald Trump came into office and began improving relations with Saudi Arabia. Trump listed the Houthis as a terror group in his last weeks in office.

Joel B. Pollak is Senior Editor-at-Large at Breitbart News and the host of Breitbart News Sunday on Sirius XM Patriot on Sunday evenings from 7 p.m. to 10 p.m. ET (4 p.m. to 7 p.m. PT). His newest e-book is How Not to Be a Sh!thole Country: Lessons from South Africa. His recent book, RED NOVEMBER, tells the story of the 2020 Democratic presidential primary from a conservative perspective. He is a winner of the 2018 Robert Novak Journalism Alumni Fellowship. Follow him on Twitter at @joelpollak.