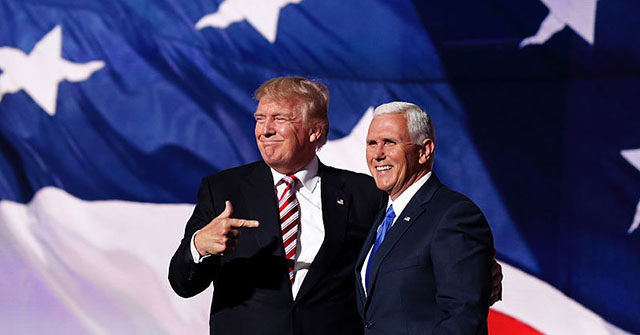 Former Vice President Mike Pence plans to build on what former President Donald Trump accomplished as he sets out to lead efforts to shape the future of the conservative movement and Republican Party, his chief of staff Marc Short told Breitbart News on Friday.

“Mike’s roots are in the conservative movement,” Short said in a phone interview. “It’s the foundation for his philosophical and political views. But, President Trump brought in a large number of new voters into the party and into the movement. He’s focused on how do we continue to build upon that.”

On Thursday, Pence and the Heritage Foundation—as Breitbart News first reported—announced that he was joining the conservative institution as a senior visiting fellow.

Then on Friday morning, Young America’s Foundation (YAF) announced that Pence would be joining its organization as its Ronald Reagan Presidential Scholar. YAF, which sponsored then-California Gov. Ronald Reagan’s nationally syndicated radio program in the late 1970s before his successful 1980 presidential campaign after his unsuccessful 1976 bid, will sponsor a podcast from Pence as well.

“Vice President Pence has been a stalwart defender of individual freedom, traditional values, free markets, and limited government throughout his career of distinguished service to our country,” former Wisconsin Gov. Scott Walker, now YAF’s president, said in a release. “Now, by partnering with YAF, the Vice President will continue to attract new hearts and minds to the conservative cause, passing along the ideas of freedom—just as President Reagan did before, during, and after his time in office. Vice President Pence’s energy and enthusiasm for Ronald Reagan’s values has and will continue to inspire a new generation of young people.”

We are thrilled to have @Mike_Pence join @yaf as the Ronald Reagan Presidential Scholar. He is a full spectrum conservative who will inspire our students. https://t.co/HvrErQgMH5

Back in November, in the immediate aftermath of the election, Pence delivered an address to YAF at the conference during which Walker took the reins of the group from its longtime president Ron Robinson. In the speech then, Pence implored Trump supporters and conservatives to “stay in the fight” and keep pushing forward no matter what happened in the weeks afterward with election challenges that ultimately failed to ensure Trump’s legacy survives.

“Think about what’s already been recognized,” Pence said in that YAF speech. “This President actually secured 72 million votes. That was more than 10 million more votes than we received in 2016. In fact, it’s more votes than any Republican candidate or any incumbent President in the history of the United States of America. And what maybe meant the most to the President and me is that the vote that came in on November the 3rd for this Republican President actually included the highest proportion of American minority voters in 60 years.”

That record level of support for Trump, Pence added then, also translated into down-ticket successes for Republicans in House and Senate races as well in state-level contests.

“Because of the support that all of you provided and all the states from which you come, we actually already have added 12 seats to the House of Representatives,” Pence said. “And we won three state houses.”

Then then-vice president also said in the November 13 address to YAF that the president and his supporters are fighting to “preserve everything that we’ve accomplished.”

“It really is amazing to think about what we have done in the last four years,” Pence said. “And I say that with a little swirl of my hand because I picked that up off the President. I’ve lost count of the number of times that people would come into the Oval Office and say to the President, ‘Thank you for what you’ve done.’ And he would always—he gets his— just ‘We.’ I mean, this is a President that understands that everything that we’ve been able to accomplish it’s because of the support of tens of millions of Americans who knew we could be strong again, who knew we could be prosperous again if we regrounded our nation in all the ideals and principles that have always made America great.”

Short, Pence’s closest aide, explained to Breitbart News on Friday that these decisions by Pence—to join Heritage and YAF—are part of a broader effort by the former vice president and potential future presidential candidate to help guide the Trump movement forward in the months and years ahead.

“Both Reagan and Trump were transformational presidents,” Short said. “There is a lot that we look to in the last four years and see what we’ve accomplished from immigration policy to the judicial branch to rebuilding the military to historic tax cuts and deregulation that we think as well is a prescription for the future. I think what the vice president would tell you is he sort of came of age politically during the Reagan years, and I think we know the policies of the last four years that have benefitted the nation’s national security and economy and that we want to make sure we continue to build upon that.”

Short told Breitbart News that the Trump era helped flesh out a broad vision—America first—for the movement, the party, and the country, and Pence intends to keep that discussion going in the coming weeks, months, and years.

“I think that both Reagan and Trump brought into the party a broad number of new voters that were middle class, blue collar, midwestern voters,” Short said. “Mike Pence comes from a blue collar, middle class, midwestern family. I think that he is somebody that can look at both of those movements and appreciate what they added to our party and our movement. And I think that, as you said, many of the policies like taking on China and not having a continued abdication of our sovereignty and appeasement to the Chinese Communist Party is essential to what I think a lot of American workers want when it comes to their jobs. You’ll see the vice president want to continue those policies and ideas that help our party and movement flourish best.”

In a series of interviews with Breitbart News when he was vice president, both before and during the coronavirus pandemic during which he was the chairman of the White House Coronavirus Task Force, Pence laid out that vision on every major issue from China to trade to immigration and more.

Moments after the U.S. Senate overwhelmingly—89–10—adopted the U.S.-Mexico-Canada (USMCA) trade agreement in January 2020 aboard his campaign bus in Florida between Tampa and Orlando, Pence told Breitbart News that the “USMCA is a huge win for American workers and American farmers.”

“It is a historic achievement following decades of shuttered factories and lost jobs in the wake of NAFTA,” he said.

Later in the year, in Philadelphia in July 2020, Pence told Breitbart News that under Trump the Chinese Communist Party was no longer getting a free ride at the expense of American workers.

“When we took office, China was half of our international trade deficit,” Pence said in that July interview. “President Trump made it clear that those days are over. We put China on notice that we were no longer going to tolerate trade policies and practices that have seen American jobs shipped overseas. So he’s used his authority and imposed tariffs and taken a strong stand. We’ve also, on strategic issues, we’ve made it clear we’re going to stand up for the interests of America in the Asia-Pacific. We’ve defended the freedom of navigation. In fact, we have two aircraft carriers in the South China Sea taking a strong stand. Also, just more recently with China breaking their word on Hong Kong, and the president has announced we are taking action that will be out in the coming days that will demonstrate our commitment to the people of Hong Kong and our commitment to freedom-loving people around the world. But that, whether it be the strong stand on trade and tariffs, whether it be our commitment to our strategic interests in the region, or whether it be our stand for freedom and human rights, no president in my lifetime has been tougher on China than President Donald Trump.”

On courts and the judicial branch, after the vice presidential debate where Pence faced off with then-Sen. Kamala Harris (D-CA)—now the vice president—in Salt Lake City during a campaign swing through Florida at the Villages, Pence told Breitbart News it was “outrageous” that Harris and now-President Joe Biden would not give a clear answer on court-packing.

“It is outrageous that a candidate for the highest office in the land won’t tell the American people what he’s going to do with the highest court in the land,” Pence said in that October 2020 interview. “Joe Biden and Kamala Harris have got to come clean. They’ve got to tell the American people whether they’re going to pack the court. Honestly, the way I saw Kamala Harris respond in our debate, the way that I saw Joe Biden duck the question in the presidential debate—for them to now say, ‘You’ll know my opinion after the election’ and we ‘don’t deserve to know’ tells me all I need to know. That is Joe Biden and Kamala Harris and the Democrats are going to pack the court if they take the Senate. But we’re not going to let it happen. We’re going to re-elect Donald Trump for four more years in the White House.”

Pence was one of the most prolific campaigners for Trump, too, touring the nation hitting all the battleground states and helping guide the campaign and party forward. As for the future, Short told Breitbart News that while Pence is obviously not announcing a run for president himself in 2024 at this time, if he does run down the road he is “uniquely positioned to bring together and marry the traditional conservatives and the Trump voter.”

But, for now, Pence is focused on helping the movement and the party in the immediate elections ahead like looming governor’s races later this year in a handful of states including Virginia as well as looking ahead to the 2022 midterm elections. Short said Pence “will be very active” on the campaign trail in the upcoming elections. As a former governor of Indiana before his election as vice president, as well as the former House GOP conference chair when he served in the U.S. House, Short said that Pence is intricately involved in all facets of the Republican Party’s future prospects.

“I think his focus is really going to be on 2022,” Short told Breitbart News. “We’ve had conversations with RGA [the Republican Governors Association]. Mike was a governor, and he was on the executive committee of RGA, and there is lot of really important races at the state level but also importantly there are a lot of important prospects of reclaiming the House. I think, ultimately, we’ve seen time and again when Democrats have controlled government they have overstepped. When Mike was the conference chairman of the House Republicans and helped communicate the message to Americans of the Obama-Pelosi agenda in 2008 to 2010, we had a record-setting year. He’s going to be focused on how do we reclaim the House and how we win a lot of governor’s seats in 2022.”