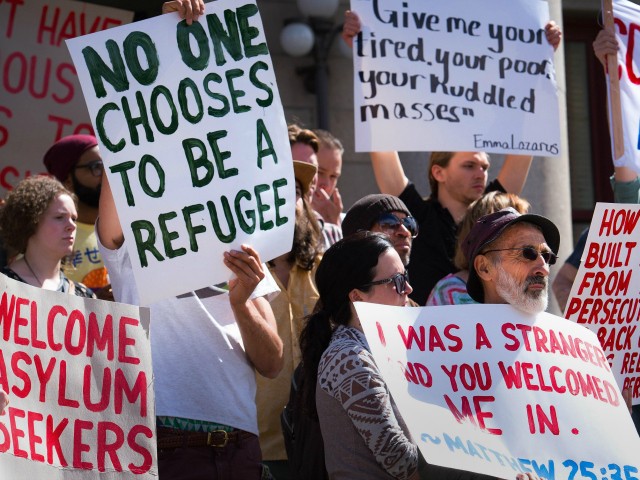 On Thursday, Biden signed an order that will set the maximum number of refugees resettled in the U.S. at 125,000 for Fiscal Year 2021. The refugee cap is simply a numerical limit and not a goal for federal officials to reach.

In Fiscal Year 2020, the Trump administration admitted less than 12,000 refugees as the program was largely halted to slow the spread of the Chinese coronavirus and only emergency cases were processed. Biden’s increase means that the U.S. will likely see a nearly 960 percent increase in refugee resettlement this year, despite the ongoing crisis.

Nine refugee contractors — who have a vested interest in ensuring as many refugees are resettled across the U.S. as possible because their annual federally-funded budgets are contingent on the number of refugees they resettle — are celebrating Biden’s order.

“There is more to be done to fully restore welcome, but for now, we’re celebrating!” wrote CWS officials while HIAS and USCRI officials thanked Biden.

Today, @POTUS announced that he will soon sign an executive order to welcome 125,000 refugees during fiscal year 2022. 👏

We’ll have full coverage once it’s signed. There is more to be done to fully restore welcome, but for now, we’re celebrating! #RefugeesWelcome #Welcome125k pic.twitter.com/13pcp8mxFF

Thank you @POTUS for following through on your promise by committing to raising the refugee admissions ceiling to 125,000 people in the fiscal year starting on October 1, 2021. We look forward to #restoringwelcome in the U.S. and helping resettle people seeking safety. https://t.co/bA0A4L1qap

.@USCRIdc applauds @POTUS #ExecutiveOrder to restore the US Refugee Program and increase the #refugee admission to 125k by 2022. #EveryoneEverywhereEqualValue pic.twitter.com/A38pxHAhMJ

Officials with LIRS called Biden’s order a “bold recognition of the scope and scale of the worst global displacement crisis in history.” ECDC officials were more direct, writing “Thank you President Biden.”

“We look forward to working with your Administration in restoring programs that benefit all Americans as well as immigrants and refugees,” ECDC officials wrote.

Also cheering the impending spike in refugee resettlement is the United Nations’ (UN) Refugee Agency, which advocates for mass migration across the globe.

“It also shows that strength is rooted in compassion,” UN officials wrote in a statement. “It signals that the United States will do its part, as it has historically done, to help the world’s most vulnerable people, including by welcoming them in the United States.”

Over the last 20 years, nearly one million refugees have been resettled in the country. This is a number more than double that of residents living in Miami, Florida, and would be the equivalent of annually adding the population of Pensacola, Florida, to the country.

Refugee resettlement costs American taxpayers nearly $9 billion every five years, according to research, and each refugee costs taxpayers about $133,000 over the course of their lifetime. Within five years, an estimated 16 percent of all refugees admitted will need housing assistance paid for by taxpayers.