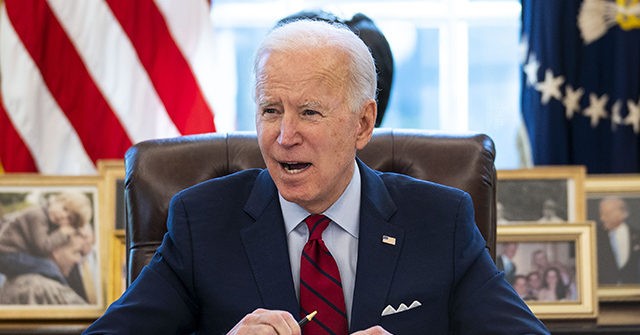 House Republicans are pressing President Joe Biden to identify funds Congress has designated for coronavirus relief over the last year that have not yet been spent, and use those before piling on with additional government spending.

A letter led by Rep. Kat Cammack (R-FL) to Biden pushes the president to identify those pots of money — perhaps in the hundreds of billions or more than a trillion dollars — that have not yet been used.

“We write today concerned about your proposed $1.9 trillion emergency spending proposal related to COVID [coronavirus] relief,” the House GOP members wrote to Biden in a letter Breitbart News exclusively obtained ahead of its public release. “We believe federal agencies should use funds that have not been committed or disbursed and are currently available before Congress considers another massive emergency spending bill. Congress has already provided $4 trillion to respond to the COVID pandemic over the last year, and the last $900 billion in funding was signed into law just over a month ago on December 27, 2020. The official government tracker for agency spending on the COVID response was last updated with data through December 31, 2020, and it may not include new government commitments. However, according to a nongovernmental tracker of COVID relief funds by the Committee for a Responsible Federal Budget, $1.3 trillion currently remains available for the federal response to the pandemic.”

Pres. Biden is asking for an additional $1.9T in #COVID relief. Guess he missed the memo that we still have $1.3T unspent from previous packages. How about we start there instead of garnishing our children’s future wages by spending money we don’t have?https://t.co/zo2CVXZy0H

Cammack, a freshman conservative from northern Florida, told Breitbart News that this strong showing among Republicans in the House shows real concern among Americans nationwide with the fiscal irresponsibility of career politicians in Washington, D.C.

“Last year, Congress spent $4T in response to the COVID pandemic, with $900B signed into law just after Christmas,” Cammack told Breitbart News. “This unchecked spending garnishes the wages of our future children. Our national debt has skyrocketed, reaching nearly $28T, and we’ve spent more on COVID relief than all New Deal-era programs combined. There’s money in the pipeline already and we need to be serious about delivering COVID relief to Americans using funds that have already been appropriated.”

The letter to President Biden continues by noting that, while Republican House members continue to believe the safety and health of American citizens is paramount in the pandemic response, fiscal concerns for the long term wellbeing of the nation also mandate consideration. When there is likely more than a trillion dollars sitting around unspent from the two previous major coronavirus relief packages, these members believe that money should be spent first before Biden embarks on new spending packages.

“The wellbeing and security of American citizens is our priority. That said, solutions today should not cause tomorrow’s problems. In the case of this unchecked spending, we are on a dangerous path with an unsustainable fiscal crisis looming,” the members wrote to Biden. “Congress should not consider another trillion-dollar emergency spending bill if federal agencies have yet to get money out the door from previous COVID relief spending bills. At this time, with an estimated $1.3 trillion available to your Administration, it would be misguided for Congress to move forward with additional funds without assessing the impact that existing resources will have on preventing the spread of COVID and recovery efforts. The U.S. national debt is nearly $28 trillion, and we have experienced a deficit every year since 2001. Moreover, we face numerous challenges at home and abroad that will continue beyond the pandemic. Our current spending levels and national debt are unsustainable and must be addressed immediately.”

Biden offered a $1.9 trillion additional coronavirus relief package out the gate on his first day in office, and it has since been met with skepticism in both parties on Capitol Hill. A group of 10 GOP senators went to the White House last week to meet face-to-face with Biden and offered a substantially smaller package — a $600 billion deal — which the Democrats say is a nonstarter. Meanwhile, since a filibuster in the Senate would require 60 votes to overcome — 10 Republicans would need to join with all Democrats to pass it through regular order — Democrats in Congress have begun the process of using a budget reconciliation to get around the filibuster and pass a deal with just Democrats.

The Democrats’ slimmed down House majority combined with a 50-50 Senate where Vice President Kamala Harris breaks the tie, handing the Democrats the majority, means there is little room for error on the Democrat side. Harris came under fire for conducting local television interviews in Arizona and West Virginia where Democrat Sens. Kyrsten Sinema (D-AZ) and Joe Manchin (D-WV) respectively have expressed some concerns with the direction of the Biden administration’s agenda.

Meanwhile, Biden himself has reportedly expressed to Democrats a willingness to negotiate and alter the top-line cost numbers for his plan, but to get Republicans on board on coronavirus relief — as the Biden team says it wants to, pledging unity in the country and bipartisanship in Washington to no avail as of yet — Biden would need to follow the advice of these House Republicans in the Cammack letter and dig into cash as of yet unspent from previous coronavirus relief packages.

“As you and your Administration continue to respond to the COVID pandemic, we urge you to use available resources and inform Congress on the status of those funds before Congress debates additional emergency spending,” the House Republicans on the Cammack letter wrote to Biden.