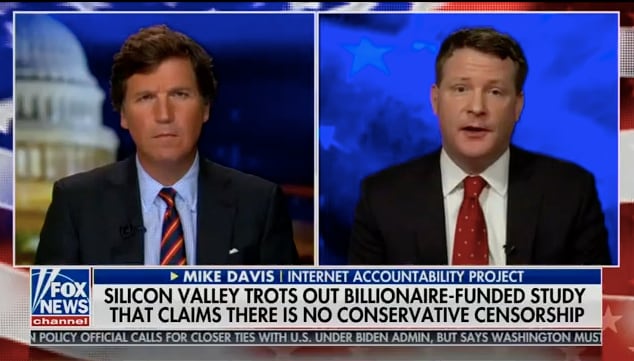 The study titled, “False Accusation: The Unfounded Claim that Social Media Companies Censor Conservatives” states that claims of anti-conservative bias are “a form of disinformation: a falsehood with no reliable evidence to support it.”

“No trustworthy large scale studies have determined that conservative content is being removed for ideological reasons or that searches are being manipulated to favor liberal interests,” the study continues.

Davis explained that this study, funded by a “tech oligarch,” was done to protect big tech corporations.

Davis noted that most institutions or “think tanks” in Washington D.C. are funded by these tech oligarchs.

“This is not just a problem with Democrats in Washington D.C. There are many Republicans in D.C., who are bought off by big tech, by Google, by Amazon, by Facebook, by Apple, by Twitter,” Davis explained. “This is a bipartisan problem in D.C. and the swamp and I think conservatives across America need to put pressure on their Republican members in Congress to go on the side of everyday Americans instead of big tech oligarchs.”

“I think big tech has a hold of both parties in Washington D.C.”

Carlson applauded Davis for continuing his fight against big tech, “you are fighting a lonely battle, but a worthy one.”