Rep. Marjorie Taylor Greene (Ga.) has been under a blistering assault from leftist politicians and members of the republican wing of the UniParty vulture. 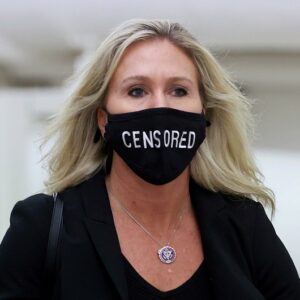 The current approach is an attempt to “Alinsky” (Isolate, Ridicule, Marginalize) Ms Greene and vote to remove her from her committee assignments.  Her crime: thoughts against the regime and open discussions of questions she carries; this, pesky freedom of expression thing, is not to be tolerated in a totalitarian state.

There is a massive amount of hypocrisy when contrasting Rep Taylor Greene’s statements against those made by almost every democrat who was pushing the Trump-Russia conspiracy hoax for over 4 years.

WASHINGTON DC […] The House is set to vote on removing Taylor Greene from her committee assignments on Thursday.

She is a member of the Education and Labor Committee, a point of scrutiny given her past statements suggesting school shootings were staged to build the case for gun control. (more)

Below Representative Marjorie Taylor Greene joins Dinesh to address the subject of who the real kooks are in Congress.