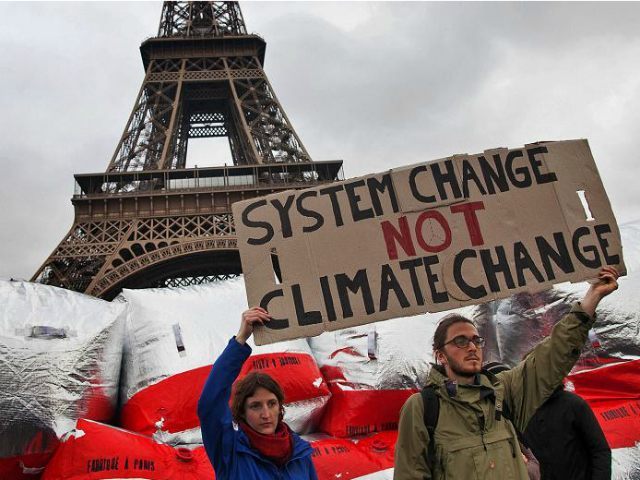 The Paris Agreement, if fully implemented, would lower temperatures around the planet by 0.05 degrees Fahrenheit, stated Bjorn Lomborg, president of the Copenhagen Consensus Center and author of , on Friday’s edition of SiriusXM’s Breitbart News Daily with host Alex Marlow.

“If all nations did all of their promises, which include what Obama originally promised, we would see temperature cuts by the end of the century of less than 0.05 degrees Fahrenheit,” Lomborg said in reference to the Paris Agreement, an international agreement brokered by the United Nations and described by the institution as “an international treaty on climate change.”

U.S. reduction of carbon dioxide emissions in recent years is primarily a function of the increasing share of America’s energy coming from natural gas, Lomborg noted.

Lomborg explained, “This is not what’s going to make or break the climate conversation. What you also pointed out was that the U.S. has dramatically cut carbon [dioxide] emissions. Some of this because of wind and solar [energy], but most of it is because you found a way to get really cheap gas, and that gas emits about half as much as what coal does, and because you basically made the fracking revolution that made gas incredibly cheap.”

“A lot of power plants have changed over from coal to gas, and that has dramatically reduced your emissions,” Lomborg added. “This shows how you can fix climate effectively. Europe is spending lots of money on subsidizing inefficient solar and wind, and we cut some C02. We feel very, very proud of that, at the same time. But you guys have managed to cut more C02, and you’ve done so while making money. Of course, that is a much more attractive proposition to make money and cut carbon [dioxide] emissions rather than spend a lot of money and only cut a little.”

Lomborg shared, “If every rich country in the world stopped all of [their] CO2 emissions tomorrow and for the rest of the century — if you run this UN climate model — it turns out that by the end of the century, you will have reduced temperatures by 0.7  degrees Fahrenheit.”

Lomborg warned of the unreliability of solar and wind energy.

“The problem, of course, is neither delivers power when the wind is not blowing or the sun is not shining,” Lomborg remarked. “This is not just a mere technicality. It means that most societies can’t just rely on solar and wind.”

The need for a reliable source of energy alongside solar and wind power necessitates the development and maintenance of parallel energy infrastructures, Lomborg explained. Such a system yields “a higher cost for the consumer,” he said.

“Gas is the bridge fuel,” Lomborg said. “This is the smart way to get a lot of nations away from coal towards gas. If we could get China to switch from coal to gas, we could do more than anything else [to lower carbon dioxide emissions].”

Lomborg contrasted the labor efficiency of solar and natural gas energy in terms of electricity production.

“For the same amount of power that one person produces in the gas sector, you need 38 people working in the solar sector,” Lomborg stated. “That’s not great. That doesn’t mean, ‘Oh, wow, we get 38 jobs instead of one,’ That means those 37 jobs can’t be used elsewhere in the economy to teach our kids or to staff our hospitals or clean streets or whatever you need people to do. … If you really wanted to, you could just hire up lots of people to dig holes. Of course, we realize that would be silly.”