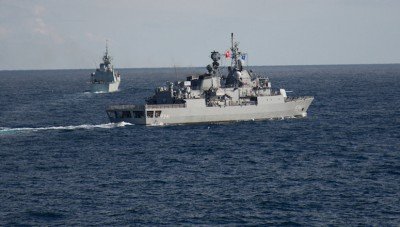 The aggressive US policy on the Black Sea continues. The presence of destroyers by American armed forces in the Russian Coast is notorious and causes discomfort among Russians due to the proximity of the region to their national territory. In a context of strong foreign presence, any military exercise or test of weapons that the Russian armed forces carry out in the region – which would be absolutely normal, considering that it is the Russian border – immediately becomes a focus of international tensions and threats. However, Moscow will not give up its strategies for simply accepting the American presence.

The Russian fleet recently conducted a simulated naval combat in the Black Sea, where two American destroyers remain. Despite being a common and routine exercise of the naval forces of any country, the situation generated a great concern in international society due to the proximity between Russian vessels and American destroyers. Clearly, in this case, Russia is just performing common maneuvers in its area of influence and the “atypical” factor would be the American presence.

The Russian exercise was a simulation of a naval combat situation, focused on the detection of enemies and neutralization by means of electronic warfare. The first phase of operations has been completed, but at a later time, new tests with the same objective will be carried out. One of the reasons why tensions increased in the region was also the fact that the Russian exercises were carried out at a time almost simultaneous with American exercises. At the end of January, a major NATO air-naval operation was carried out in the Black Sea, with the participation of the American destroyers currently allocated in the region (USS Porter and USS Donald Cook).

It has long been clear that Washington intends to encircle Russia by the seas. The presence of American ships along the Russian coast is a clear proof that there is a project to monitor and patrol Russian activities in its own zone of influence. American presence is particularly strong in the north and southeast of the coast and means a clear attempt by Washington to demonstrate strength, trying to attest its ability to monitor Russian naval activities.

In addition to the fact that Washington is maintaining combat ships in a region under the influence of a potential enemy power, a factor of great concern is the war capabilities of these American ships. The American destroyers that are currently allocated on the Russian coast stand out for being equipped with about 90 cruise missiles with a range of about 3,000 kilometers. Together, the capacity of these ships can cover almost the entire Russian territory, including Moscow. In other words, the American presence on the Russian coast has reached intolerable levels of provocation and affront to national sovereignty.

This policy is not by chance. Washington fears the advanced process of the declining of its naval hegemony, so it begins to focus on strategic points with specific tactics, which seek to inhibit its enemies – not to confront them directly. Under the “Russian threat” speech, the US and NATO place ships and conduct war tests on the Russian coast because they are aware that, in truth, there is no Russian threat or war plan on the part of Moscow, which means that the Russians will avoid as much as possible to respond to provocations with equivalent force. It is all about an attempt to contain military activities so that the Russian coastal zone remains vulnerable to NATO’s presence.

In response, Moscow’s strategy is simply to maintain its common routine of tests and exercises – which is enough for Washington to further elevate the thesis of a “Russian threat”.

The scenario does not tend to improve in the near future. With Biden, American foreign policy will become even more aggressive and the new president is likely to invest heavily in the recovery of American naval dominance – which is an important step to recover the global hegemonic status. We will probably have a future of many conflicts in the Russian coastal region – perhaps not direct confrontations, but increasingly strong and frequent tests, generating constant tensions and concerns.