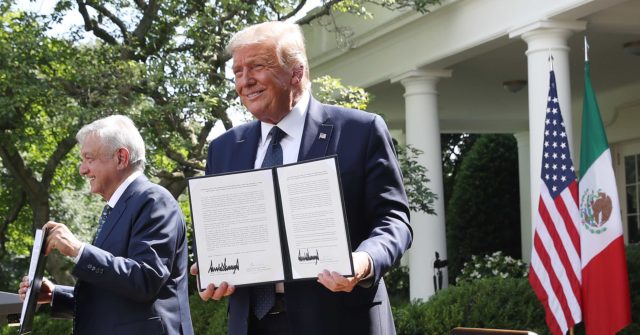 In a readout from the call, the White House said (emphasis added):

President Biden spoke with Mexican President Andrés Manuel López Obrador yesterday to review bilateral cooperation on a range of bilateral and regional issues, particularly regional migration. The President outlined his plan to reduce migration by addressing its root causes, increasing resettlement capacity and lawful alternative immigration pathways, improving processing at the border to adjudicate requests for asylum, and reversing the previous administration’s draconian immigration policies. The two leaders agreed to work closely to stem the flow of irregular migration to Mexico and the United States, as well as to promote development in the Northern Triangle of Central America. They also recognized the importance of coordination to combat the COVID-19 pandemic.

Obrador had worked with the Trump administration in curbing illegal immigration. In June 2019, Obrador signed a deal with Trump under which Mexico agreed to take historic steps to curb illegal immigration; in return, Trump withdrew a threat to apply tariffs to Mexican goods. Under the deal, Mexico deployed troops to prevent migrant flows and accepted that applicants for asylum in the U.S. would “remain in Mexico,” not the U.S., while their claimed were adjudicated.

Earlier this month, Obrador defended President Trump after he was censored and banned by Twitter and Facebook.

Joel B. Pollak is Senior Editor-at-Large at Breitbart News and the host of Breitbart News Sunday on Sirius XM Patriot on Sunday evenings from 7 p.m. to 10 p.m. ET (4 p.m. to 7 p.m. PT). His newest e-book is How Not to Be a Sh!thole Country: Lessons from South Africa. His recent book, RED NOVEMBER, tells the story of the 2020 Democratic presidential primary from a conservative perspective. He is a winner of the 2018 Robert Novak Journalism Alumni Fellowship. Follow him on Twitter at @joelpollak.