There is general agreement that George W Bush sent troops into Iraq as an outcome of the industrial war machine policy to advance U.S. interventionism; thereby completing the job his father President HW Bush was prudently not willing to escalate after the liberation of Kuwait. 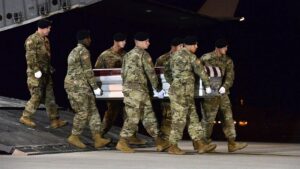 President Donald Trump attempted to draw-down U.S. military all around the globe, specifically Europe and the middle-east.  However, as history often repeats, now it appears we are see the JoeBama administration sending troops back into Syria; perhaps to attempt the same regime change objective they failed in 2013 and 2014.  The mid-east war machine is oiled with American blood.

According to the report, the convoy included some 40 trucks and armored vehicles and was backed from the air by helicopters.

It entered Syria from Iraq via the al-Waleed crossing to bring arms and logistical equipment to the bases in Hasakeh and Deir Ezzor provinces. (read more)

It is rather ironic to hear the justification around a need for U.S. military to continue fighting ISIS, al-Qaeda and al-Nusra.  Ironic, considering the Obama-Biden administration specifically armed the Islamic extremists within Syria who shortly thereafter became known as ISIS.

BACKGROUND – We know the Obama administration was arming ISIS as part of the larger Syria strategy because Secretary of State John Kerry went on record admitting the Obama Syrian strategy was actually to arm ISIS and extremist Islamic groups (al-Nusra) against Assad.

We also know Secretary Kerry was being truthful in that media-hidden, albeit recorded, admission because CTH specifically tracked and investigated the CIA weapons shipments as an accidental outcome of the finalized Benghazi Briefing material in 2013/2014.

♦ In August of 2014 President Obama (wearing a tan business suit) gave a press conference where he stated he “did not have a strategy” against ISIS. –Video Link–

♦ Two months later, in October of 2014, Josh Earnest gave a press conference where he stated: “Our ISIS strategy is dependent on something that does not yet exist” –Video Link–

However, on September 30th 2016 the New York Times quietly released a leaked audio recording of Secretary John Kerry meeting with multiple factions associated within Syria.
When you listen to the audio recording (embed below) it becomes immediately obvious what was going on when both of those 2014 statements were made by the White House. In addition, you discover why this jaw-dropping 2016 leak/story was buried by the U.S. media and how it connects to over 5 years of perplexing U.S. mid-east policy.

This evidence within this single story would/should forever remove any credibility toward the U.S. foreign policy under President Obama. It also destroys the credibility of a large number of well known republicans. What the recording reveals is substantive:

♦ First, only regime change, the removal of Bashir Assad, in Syria was the goal for President Obama. This is admitted and outlined by Secretary John Kerry.

♦ Secondly, in order to accomplish this primary goal, the White House was willing to watch the rise of ISIS by placing their bet that ISIS’s success would force Syrian President Bashir Assad to acquiesce toward Obama’s terms and step down.

♦ Thirdly, in order to facilitate the two objectives, Obama and Kerry intentionally gave arms to ISIS and even, arguably, attacked a Syrian government military convoy to stop a strategic attack upon the Islamic extremists killing 80 Syrian soldiers.

Pause for a moment and consider those three points carefully before continuing. Because this audio (below), along with accompanying research now surfacing, not only exposes these three points as truth – but also provides the specific evidence toward them.

The problem in the Obama/Kerry’s secret strategy became clear when ISIS grew in sufficient strength to give the White House optimism for the scheme – however, instead of capitulation Assad then turned to Russia for help.

When Russia came to aid Bashir Assad the Syrian Government began being able to defeat ISIS and the Islamic Extremist elements within Syria. For the hidden plan of Obama/Kerry (and also McCain, Graham, et al), Russia defeating ISIS, al-Qaeda and al-Nusra, upended their objective.

The revelations within this leaked audio are simply astounding. The 40-minute discussion took place on the sidelines of a United Nations General Assembly in New York. The meeting took place at the Dutch Mission to the United Nations on Sept. 22nd 2016:

[…] Kerry’s off-record conversation was apparently with two dozen ‘Syrian civilians’, all from US backed opposition-linked NGO’s in education and medical groups supposedly working in ‘rebel-held’ (aka terrorist-held) areas in Syria.
This opposition conclave also included ‘rescue workers’ which can only be ambassadors from the White Helmets, a pseudo NGO which serves as Washington and London’s primary PR front in pursuit of a “No Fly Zone’ in Syria, and it’s being bankrolled by the US, UK, EU and other coalition states to the tune of well over $100 million (so far). (link)

Listen to the audio.

The discussion from 18:30 through to 29:00 are exceptionally revealing and should be listened to by anyone who has wondered what was going on in Syria. Kerry even makes mention of the “Responsibility to Protect, or R2P” principle. A policy created by Samantha Power (former U.N. Ambassador and Cass Sunstein’s wife):

Further consider how this Kerry audio tape, and the now transparent Obama policy toward Syria, absolutely confirms our previous research as it is contained with the Benghazi Brief surrounding Syria during the Obama-Biden years:

(JULY 2012) As they stood outside the commandeered government building in the town of Mohassen, it was hard to distinguish Abu Khuder’s men from any other brigade in the Syrian civil war, in their combat fatigues, T-shirts and beards.

But these were not average members of the Free Syrian Army. Abu Khuder and his men fight for al-Qaida. They call themselves the ghuraba’a, or “strangers”, after a famous jihadi poem celebrating Osama bin Laden’s time with his followers in the Afghan mountains, and they are one of a number of jihadi organisations establishing a foothold in the east of the country now that the conflict in Syria has stretched well into its second bloody year.

They try to hide their presence. “Some people are worried about carrying the [black] flags,” said Abu Khuder. “They fear America will come and fight us. So we fight in secret. Why give Bashar and the west a pretext?” But their existence is common knowledge in Mohassen. Even passers-by joke with the men about car bombs and IEDs.

According to Abu Khuder, his men are working closely with the military council that commands the Free Syrian Army brigades in the region. “We meet almost every day,” he said. “We have clear instructions from our [al-Qaida] leadership that if the FSA need our help we should give it. We help them with IEDs and car bombs. Our main talent is in the bombing operations.” Abu Khuder’s men had a lot of experience in bomb-making from Iraq and elsewhere, he added.

[…] Abu Khuder split with the FSA and pledged allegiance to al-Qaida’s organisation in Syria, the Jabhat al Nusra or Solidarity Front. He let his beard grow and adopted the religious rhetoric of a jihadi, becoming a commander of one their battalions.

“The Free Syrian Army has no rules and no military or religious order. Everything happens chaotically,” he said. “Al-Qaida has a law that no one, not even the emir, can break.

“The FSA lacks the ability to plan and lacks military experience. That is what [al-Qaida] can bring. They have an organisation that all countries have acknowledged.

“In the beginning there were very few. Now, mashallah, there are immigrants joining us and bringing their experience,” he told the gathered people. “Men from Yemen, Saudi, Iraq and Jordan. Yemenis are the best in their religion and discipline and the Iraqis are the worst in everything – even in religion.”

At this, one man in the room – an activist in his mid-30s who did not want to be named – said: “So what are you trying to do, Abu Khuder? Are you going to start cutting off hands and make us like Saudi? Is this why we are fighting a revolution?”

“[Al-Qaida’s] goal is establishing an Islamic state and not a Syrian state,” he replied. “Those who fear the organisation fear the implementation of Allah’s jurisdiction. If you don’t commit sins there is nothing to fear.” (link – more)

al-Qaeda’s goal was to establish the Islamic State, that’s the origin of ISIS. Against the backdrop of ISIS formation in Syria, and understanding the Obama objectives were regime change first and foremost, we can now reconcile all of Obama’s foreign policy surrounding Syria.

President Obama, Secretary Clinton and later Secretary Kerry, together with John McCain, and the CIA tentacled team within the Republican party, were willing to support ISIS (under all factional names) in order to overthrow Bashir Assad…

Now, does THIS  and the moves today also begin to make more sense.