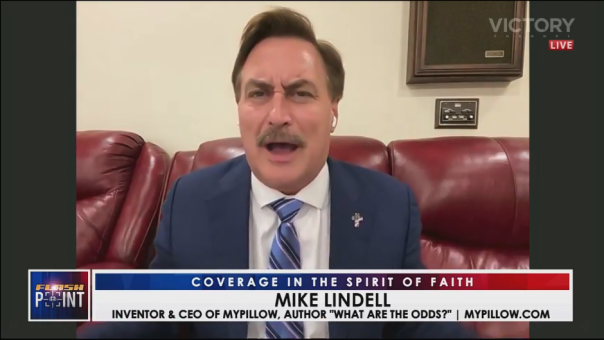 Manchester millionaire Mike has smoking gun evidence that shows beyond doubt the international hacking of US voting systems on election night. Below: A print-out revealing web traffic on US election night.

By TONY MOBILIFONITIS
MIKE Lindell, who most Australians probably never heard of, is the most hated businessman in America among the Democrat and media crowd. Lindell took time off from selling pillows to gather evidence of election fraud involving voting machines. He personally showed a smoking-gun example to President Trump just before the Inauguration.

The evidence, a log of online computer transactions, shows beyond doubt that the US election system was hacked by foreign players. Election authorities, those elected and courts will have to deal with this.

No longer can the media and Democrats claim there is no evidence. A legal process involving a common law writ of Quo Warranto could be used to get this evidence in the court. This prerogative writ requires the person to whom it is directed to show what authority they have for exercising some right, power, or franchise they claim to hold.

J.D. Rucker, editor in chief of The NOQ Report, writes: “A writ of quo warranto … doesn’t require a new piece of bombshell evidence. It takes the accumulated bombshells, affidavits, videos, and other pieces of evidence and consolidates them into one legal case. There are a few things that make this play completely different from what Rudy Giuliani, Sidney Powell, and others have attempted through our corrupt judiciary. With a writ of quo warranto, the clock starts after inauguration because it challenges a sitting government official’s authority to be in office based on actions, such as voter fraud, that aided in that situation.”

Mike Lindell, a converted ex-crackhead-turned-Manchester millionaire, hit the jackpot this month when he and his investigating associates came across the document provided by the operators of the website The American Report.org. Cairns News was able to get a copy of the print-out showing a computer transaction log.

Lindell has been chasing voter fraud in the key states since early in November after the election and believes the providential hand of God is at work. He says the first miracle was that the massive Trump vote broke the vote manipulation algorithms in the election counting software in the key states that all had installed the Dominion machinery and election software. That is what led to the counting shutdown late on November 4th when the vote tallies had to be backfilled for Biden – a process that took weeks in some cases.

“If they hadn’t broke those algorithms we would’ve all went to bed at 3am because Biden would’ve won … and we wouldn’t have realized that all the fraud that went on. We would’ve thought it was mail-in voting and that was the reason why, but no it wasn’t,” Lindell told the FlashPoint show on the Victory Channel.

“So … we all did this big investigation, and here’s the second miracle. All these states where you had evidence, of ‘hey 6000 people voted that died; 20,000 voted that don’t even live there, they’re non-residents’, and nobody took that as evidence … ‘so can you at least take these off the pile and Donald Trump wins’? But they didn’t do that. But this gave us one thing: If we had have overturned all them then…. we would’ve never found the big problem – and that’s the machines.”

Lindell said the evidence of voting machine fraud came up on Twitter in a document shared from The American Report.org. The website was attacked and taken down but is back online now. “I’m going wow, what is this? Anybody who retweeted it, it just got shut down.”

American Report.org administrators and Lindell then reached out to each other. “They had one page … they showed this forensic evidence. Its like a footprint inside … a computer, a timestamp in cyberspace. You look on there and it shows the time, the time it happened, the date 11-3, 11 o’clock at night, ChinaNet, it went over to China. It kinda shows the chain of where this stuff went.

“It goes over to China and shows the longitude and latitude then it comes back and shows which computer was hacked, the exact IP address, how many votes were flipped.” He said the log paper came from Fulton County, Georgia, and there are 10,800 such sheets in that state alone.

Lindell also happened to meet a mathematician and cyber expert who was able to confirm the data movements and had been working on the voting number anomalies in Georgia since November 4th. His calculations showed 24,000 votes had flipped inside the voting machine.

When the media learned that Lindell had been to see President Trump and started to talk to him, they drummed up a story falsely claiming Lindell told the President to declare martial law. He was ridiculed all over Twitter and other media. He also received a letter from Dominion Voting Systems threatening a defamation suit. Lindell welcomed it as an opportunity to air the evidence. 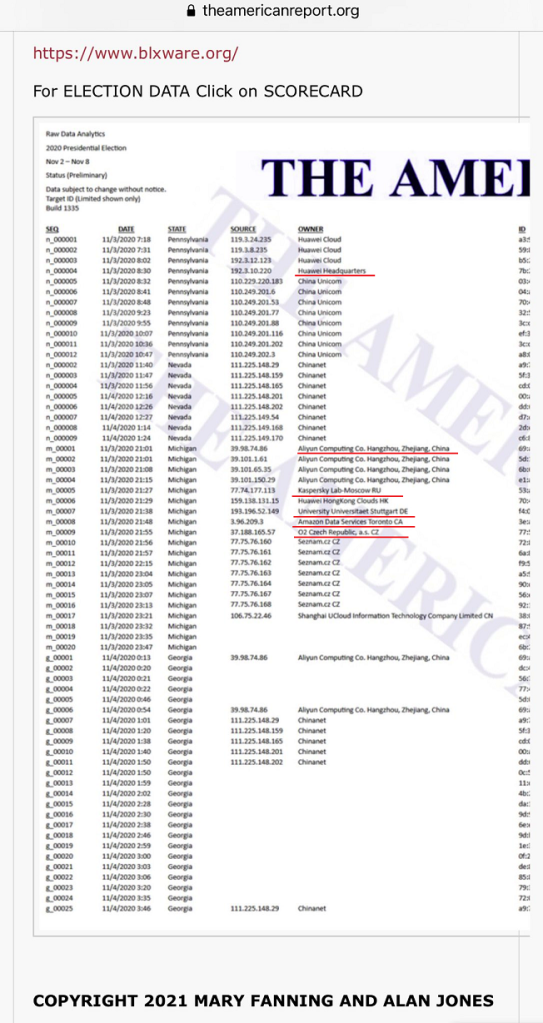