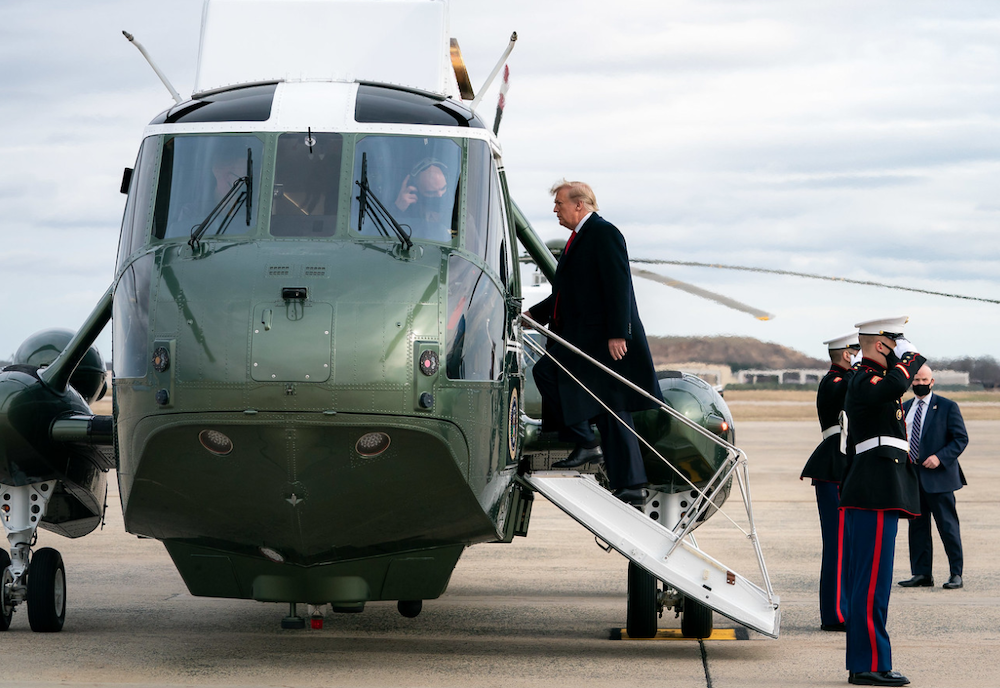 Despite the left’s insistence that his departure would require force, outgoing President Donald Trump peacefully left the White House and Washington, D.C., on Wednesday as his successor, President Joe Biden, was inaugurated.

Long before Biden’s arrival in office, many corporate media pundits and Democratic politicians insinuated that Trump would not leave office unless he were physically forced. These cries and arguments grew louder after a mob consisting mostly of Trump supporters rioted at the Capitol just two weeks before the inauguration.

“I don’t think he plans to leave the White House. He doesn’t plan to have fair and unfettered elections,” Clyburn said, comparing Trump to Adolf Hitler and Benito Mussolini. “I believe that he plans to install himself in some kind of emergency way to continue to hold onto office.”

“I don’t think he plans to leave the White House. He doesn’t plan to have fair and unfettered elections. I believe that he plans to install himself in some kind of emergency way to continue to hold onto office,” Democratic Rep. James Clyburn says about Pres. Trump. #CNNSOTU pic.twitter.com/QUo8jux5kx

In late November, former President Barack Obama quipped to late-night host Jimmy Kimmel that the Navy SEALs could remove Trump if he refused to leave the White House when he was supposed to.

“You know the White House well. You lived there for eight years. Are there places someone could hide? Like, if, say, they were going to be removed? Are there little cubby holes or anything that you know about?” Kimmel asked.

“Well, I think we can always send the Navy SEALs in to dig him out,” Obama said, laughing.

Others on the left, including politicians and journalists, also suggested Trump would try to hijack the military to stay in office, no matter the election results.

“No One Knows How To Get Trump To Leave The White House In January,” one Vanity Fair headline read.

Instead of being dragged away kicking and screaming or inciting an insurrection like some on the left wrongly predicted, Trump addressed a peaceful and admiring crowd on the tarmac of Joint Base Andrews the morning of Jan. 20, reiterating his agenda and expressing hope.

“This has been an incredible four years. We’ve accomplished so much together. … Remember us when you see these things happening, have you remember us. … We have worked hard. We’ve left it all, as the athletes would say, we’ve left it all on the field,” Trump said, reviewing some of his administration’s achievements including the creation of Space Force, the revival of the American economy before and after the COVID-19 pandemic, tax cuts, extra care for veterans, facilitating the development of a vaccine in nine months, and nominating many judges to federal courts and confirming three to the Supreme Court.

“You are amazing. This is a great, great country. It is my greatest honor and privilege to have been your president,” Trump concluded. “I will always fight for you. I will be watching, I will be listening. And I will tell you that the future of this country has never been better. I wish the new administration great luck and great success. I think they’ll have great success. They have the foundation to do something really spectacular. And again, we put it in a position like it’s never been before.”

Trump also pledged not to disappear from the political arena.

“We will be back in some form,” Trump promised as the crowd chanted, “Thank you, Trump” and “USA.”