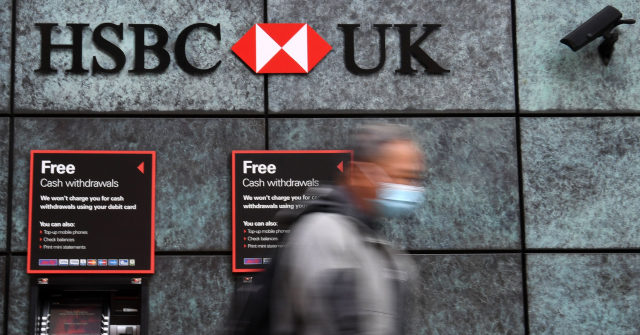 HSBC has said it will “reserve the right” to cancel the accounts of customers who refuse to wear masks inside its UK branches.

The British-based bank — the Hong Kong & Shanghai Banking Corporation (HSBC) founded in 1865 — said that masks are mandatory in all branches unless visitors have a medical exemption.

A spokesman for HSBC told The Mirror on Tuesday that it advises its customers: “If you do visit us, please wear a face covering and maintain a safe distance from others. If individuals put themselves or our colleagues at risk, without a medical exemption, we reserve the right to withdraw their account.”

In December, the British multinational froze the account of a church in Hong Kong that backed the pro-democracy movement. That same month, HSBC also froze the accounts of exiled Hong Kong lawmaker Ted Hui, his wife, and his parents, reportedly under the orders of Chinese Communist Party-controlled police.

Britain’s Foreign Secretary Dominic Raab criticised HSBC in July for its support of the CCP-backed security laws which resulted in the crackdown on the pro-democracy movement in Hong Kong.

This week has also seen almost all major British supermarkets, Tesco, Asda, Waitrose, Aldi, Sainsbury’s, and Morrisons, saying they will refuse entry to customers not wearing a mask, unless they have a medical exemption. Supermarkets like Tesco are also demanding shoppers shop alone, and several have said they have hired extra security to enforce the measures.

“Should a customer refuse to wear a covering without a valid medical reason and be in any way challenging to our colleagues about doing so, our security colleagues will refuse their entry,” an Asda spokesman said.

Reports revealed this week that German banking giant Deutsche Bank has decided cut ties with President Donald Trump, while New York lender Signature Bank has said that it will be closing down two of the Republican leader’s personal accounts.

Big Tech has also targetted the social media app Parler, which is part-owned by conservative American commentator Dan Bongino, who also owns a stake in YouTube competitor Rumble. Apple and Google removed Parler from their app stores over the weekend, while Amazon kicked Parler off its AWS servers on Sunday.

The social network’s CEO John Matze said that the website would be unavailable “for up to a week as we rebuild from scratch. We prepared for events like this by never relying on Amazon’s proprietary infrastructure and building bare metal products.”

“This was a coordinated attack by the tech giants to kill competition in the market place,” the CEO said, adding: “We were too successful too fast. You can expect the war on competition and free speech to continue, but don’t count us out.”