This species experiment to inject this new technology into every human could be from the script of a sci-fi horror movie. Why would you want to vaccinate billions of children that are not affected by the so-called virus?  And if this mRNA technology is so safe why is there a ‘no liability’ clause? Anyway, we should stop calling the Covid-19 vaccine a ‘vaccine’. It is clear that there is something sinister afoot.

I was going to break this article into two or more, but have decided to combine the three topics to keep the comments in one thread. The three connected parts are:

Fallout From the Shots

The first person I heard that passed away from the Pfizer “vaccine” was Nurse Tiffany Dover, as I reported in this article, “If Only Nurse Dover Listened To Anti-Lockdown Protest Song.” Her Instagram account remains unchanged, with over 10,000 messages asking for her to reply. Sadly, it seems she passed away as many online investigators located her death being reported on Search Quarry — a search tool that has now specifically blocked searching just her name.

Another very sad example is Dr Gregory Michael (56). Heidi Neckelmann, Dr Michael’s widow said her husband was vaccinated with the Pfizer vaccine on 18 December and died 16 days later — as quoted in the Daily Mail (and here in Infowars).

Heidi says, “In my mind his death was 100 percent linked to the vaccine. There is no other explanation,” … “He was in very good health. He didn’t smoke, he drank alcohol once in a while but only socially. He worked out, we had kayaks, he was a deep-sea fisherman.” she added. In a recent health check, he was absolutely healthy.

It is reported that

“Three days after vaccination, small spots began to appear on Gregory Michael’s feet and hands. In response, he went to the emergency room at Mount Sinai. As his blood count was not in the normal ranges, he was admitted to the intensive care unit, according to Heidi Neckelmann. Unfortunately, he suffered a stroke and died.”

Our thoughts go out to his family. 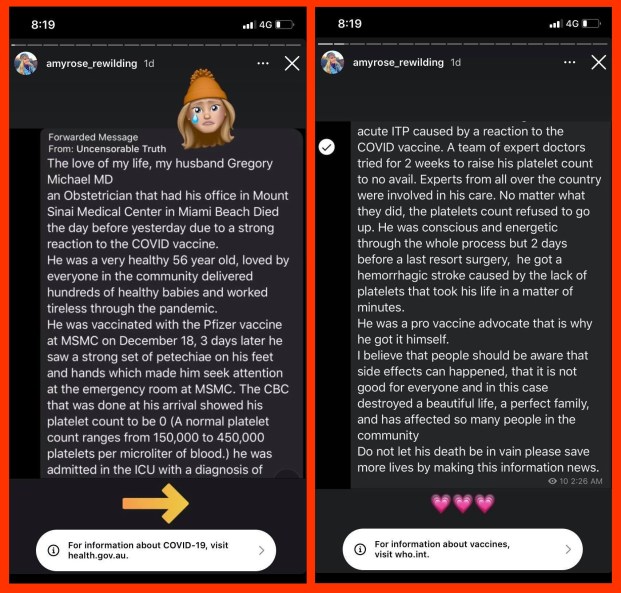 Sonia Acevedo, a 41-year-old nurse suffered a ‘sudden death’ at her home on 1 January 2021, 48 hours after being vaccinated with the Pfizer-BioNTech vaccine. “Acevedo’s father, while speaking to the local media, said his daughter was absolutely fine after receiving the vaccine jab and did not show any symptoms before her death.” Sonia, a frontline health worker, and mother of two, worked at the Portuguese Institute of Oncology in the department of pediatrics in Porto.

Epoch Times reports on “Severe Allergic Reactions to COVID-19 Vaccines Occurring at Higher Rate Than Flu Shots.” Ten times more. Officials at the Centers for Disease Control and Prevention (CDC) said that the reactions, known as anaphylaxis, are happening at a rate of 11.1 per million vaccinations. With flu vaccines, anaphylaxis occurs at a rate of 1.3 per 1 million injections. But Dr. Nancy Messonnier, director of the CDC’s National Center for Immunization and Respiratory Diseases, said “…but I want to reassure you, this is still a rare outcome.”

How rare? “…Carlos Palestino, the brother-in-law of Mexican doctor Karla Cecilia Perez, was paralyzed hours after receiving the Pfizer/BioNTech COVID-19 vaccine, according to reports.”

Stop Calling This a Vaccine

It may be worth listening to Dr David Martin describe the so-called vaccine as a “Chemical Synthetic Pathogen Device” — a pathogenic envelope that is injected into the body. To call it a vaccine is to fall into the paradigm of anti-vaxxers v pro-vaxxers — which is not helpful. This, Martin and others declare, is not a vaccine; it’s a mechanical medical device.

The VIDEO with Dr Martin, RFK Jr, Rocco Galati and Judy Mikovits can also be viewed at the Awakening Channel. To quote Dr Martin:

“Let’s stipulate, this is not a vaccine… We’re using this term vaccine to sneak it under public health exemptions… This is a mRNA packaged in a fat envelope that is delivered to a cell. It is a medical device designed to stimulate the human cell into becoming a pathogen creator. It is not a vaccine. Vaccines are a legally defined term…”

Finally, a Gumshoe reader sent me an article by Gary D Barnett about Dr Igor Shepard who relocated from Russia to the US in 1993. He has been suspended for warning the public that the coming COVID vaccines are “biological weapons of mass destruction”. But wasn’t Dr Simone Gold (leader of “America’s Frontline Doctors”) suspended for speaking out?  So maybe it worth listening to Dr Shepherd.

I quote a few sections from Dr Shepherd’s lengthy talk (thanks goes to Gary D. Barnett, LewRockwell.com, (LRC) and Vicki Marzullo who transcribed the VIDEO). Worth listening to.

An unidentified host introduces the doctor who is/was a readiness and countermeasures program manager at the Wyoming Department of Health Preparedness and Response Unit in Cheyenne, Wyoming. To provide a little background, Dr Shepherd was involved in technical research and development on national domestic preparedness and nuclear security for the DOJ for Domestic Preparedness, Department of Homeland Security, DOE and NSA, DOD, ETRA, FEMA, National Guard, tactical SWAT teams, law enforcement, first responders, medical professionals. Being from Russia, Shepherd says [quoting from the transcript]…

“SHEPHERD: …I came from a very dark world… I need to go a little bit back in my background as a military physician, internist and specialist on weapons of mass destruction… I was born under Communism.

“…I became a military officer and military physician at Strategic Rocket Force of the Soviet Union. I spent four years of my life as a chief health officer in Poland with special battalions, special operations battalions… That’s a time when I did a lot of stuff I’m not proud of. I did a lot of different vaccinations and immunizations on people, soldiers, civilian personnel… So, they brought in those suitcases of clean ampules with the material and I did the injections. Eighty-five injections an hour. Special injectors. I could not share any side effects, localized inflammation, generalized side effects, nothing. It was not my point. Because Military Intelligence was breathing upon me.”

“SHEPHERD: I want to tell you something very interesting that happened a few days ago when CDC decided not to count flu patient cases anymore for 2021… We have a problem, we have a deception, and we have treason… what I’m trying to reach to you, when I started researching the situation with COVID pandemic and SARS-2-CoV virus, I learned that this virus actually clearly is very similar to the 2003 SARS, Severe Acute Respiratory Syndrome virus, which happened in 2003… They said it’s mutated. So, we don’t have a SARS-2 anymore. We need to call it SARS-3 or 4 or 5, because mutations happen constantly with this strange ghost-looking virus. Why are we facing this?

“I’ll tell you why we’re facing this. I go back to my Communist time. I was trained to destroy the United States of America. Forgive me for that…  So, if I tell you the COVID pandemic was prepared for the last 19 years in the United States… Nineteen years, I believe, since 2001, called Operation Dark Winter exercise, biological.  Between 2000 to 2006, I worked on some projects, some classified projects at the Nevada Nuclear Test Site, city of Mercury, for NNSA, National Nuclear Security Agency. We did some work with DTRA, Defense Threat Reduction Agency. They did some biological tests inside the test site and such things.

“It took a lot of years for them to prepare for this moment, today, in the United States. And globally. It’s a global mission to bring global Communism into every corner of this land. Not only the world, the United States. The plan of the destruction of the United States right now is going with full speed. And vaccines are playing a major role in this part.”

He says these vaccines are not a new technology, “The technologies were used 30 years ago in the Soviet Union — and then China and North Korea and Cuba…”  He describes the 1977, USSR/90/77 project where they used subway systems to spray weaponized influenza A on the Soviet population. “Why did they choose subways in Leningrad? … They go very deep down there. So, airflow is beautifully controlled… Around 70,000 people died from that event…” To continue:

He then goes to Project “Factor,” a classified Russian project, in the early 1990s. They learned how to over-stimulate the immune system of people to create super-fast debilitating diseases. “How long does it take to develop multiple sclerosis for a person? It takes time. If it’s a biological release, it will only take about two weeks and the person cannot walk anymore.”

He then mentions Chinese involvement.

“Pfizer is working with BioNTech, a German company. German company and Pfizer are working with Fosun Pharmaceuticals from Shanghai, China …Beijing Institute of Biotechnology, and the Academy of Medical Military Science of China… It means the Chinese Military Biodefense. …So, they all connected to AstraZeneca, Moderna, Johnson & Johnson –- actually, it’s through Janssen, another company, not Chinese actually, but with very deep roots in China, since the ‘80s.

“Up to 15 years is a normal vaccine time. Now it’s squished into two or three months? Secretly, it was not two or three months. It was ready a long time ago. Maybe years ago. …Moderna said they developed a vaccine after that, when they received the [Chinese] samples in three hours! …Because all of these vaccines were built with algorithms. It’s mechanical. …They’re trying to reprogram us now… to reprogram our bodies actually.“

“…global Communism. That’s an agenda… I don’t even know if they [the vaccines] are actually for the COVID disease at all. Are you sure this is what it’s all about, this so-called pandemic, with a 99.8% recovery rate? And the whole world needs to be vaccinated fast. …All six, all six vaccination companies, who are building vaccines for the United States, all are in deep relation and financial affiliations from DARPA directly, military, the United States. Why such a close relation? Let’s talk about Moderna. Moderna is another mRNA-type technological vaccine. They’ve had a close relation with DARPA since 2013.”

Shepherd talks about Project “Box” or “Container 666,” then moves back to Pfizer.

“…I believe these vaccines are the first step in the transformational synchronization of your body. The more vaccines will be added to you annually, in the form of mandatory or not, because they either create links and bigger genetic shifts inside, which shifts more and more away from your human genome God gave you, OK? At some point in life, it will not be returned.”