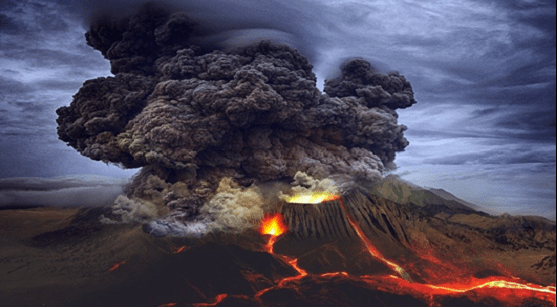 [This is the second part of the climate series. Link to Part 1 here]

Most of the atmospheric CO2 is earth-generated, originating from the natural chemical processes of rocks, volcanoes, and deep-sea thermal vents: From 1,581 land volcanoes and an estimated 139,096 active undersea volcanoes. These release huge volumes of CO2 in violent eruptions from great depths blasting kilometres high under oceans, where the massive water pressure causes pools of liquid CO2 on the seafloor, which occasionally rises to the surface increasing atmospheric CO2.

It is impossible to measure volcanic CO2; several tried with mythical figures fanatics are still quoting.

There are 138 volcanoes in Antarctica 2 active above ice others recently discovered below the ice.

Almost all undersea eruptions recorded in the past 25 years occur in the first six months of the year, earth is closest to the Sun in January and farthest away in July. Earth gets squeezed and un-squeezed by the Sun’s gravitational pull at a rapidly varying rate as it spins daily, causing pressure eruptions.

Many do not understand the Gakkel Ridge an underwater mountain chain 1,800 kilometers long from Greenland to Siberia under the Arctic-Ice is afire continuously oozing molten rock forming a new crust. In the valley the two 12 km wide coastal plates are coming apart causing serious volcanic activity with red-hot magma rising from deep inside the Earth has blown the tops off dozens of submarine volcanoes four kilometers below the ice where eruptions as big as the one that buried Pompeii, with massive CO2 discharge. (Woods Hole Oceanographic Institution study, Massachusetts, US). The Arctic Ocean is the smallest and shallowest of all oceans and subject to volcanic temperature effect nearby.

Indonesia’s Mt Toba super-volcanic eruption 75,000 years ago, was followed by a ‘volcanic winter’ of about ten years, causing a 1,000-year cooling of Earth, with the near extinction of humans and other lesser ones also caused irreversible changes.

In 1883 the eruption of Krakatoa one of the worst geologic disasters of modern times over 36,000 people died, making the loudest sound ever recorded being heard 4,500 km away in Perth. Global temp dropped 5 degrees, causing a year without summer, crops failed worldwide with starvation across many lands. Plagues swept many areas; tree rings didn’t show normal growth for fifteen years.

An unexpected outcome was the great improvements of the bicycle as horses became too expensive to feed.  (We remember that from school)

Volcanoes blast ash, CO2, and sulfur dioxide into the upper atmosphere for years, where it converts to acid, reflecting Sunlight cooling earth, volcanic ash has caused years of climate change and crop failures many times in history.  Sedimentary rocks show volcanic acidification of oceans is a natural part of earth activity over millions of years.

CO2 emissions were massive, but the Earth became cool, not warmer. Just that one major volcano Krakatoa produced more CO2 than man has ever produced—the current amount of CO2 (0.04%) is irrelevant compared to natural and volcanic emissions.  Manmade CO2 is 4.5 parts per 10,000,000,000 parts (10 B) irrelevant.

The Earth’s natural Carbon-Sink capacities can cope by absorption into oceans, soil, limestone, and plants.

The Earth’s volcanism is tied to minute shifts in motion of the Earth’s orbit around the sun that occur every 100,000 years. These shifts would trigger ice ages and warm periods, both of which affect global sea levels.

Climate Change Facts –– HERE IS HOW IT WORKS

We have seen that minute amounts of CO2 do not affect the climate, but something does — What is it?

Factors affecting Earth temperature are varied and complex—that raging nuclear furnace in the sky— ‘The Sun’—has always controlled global warming and cooling. The tilt of the Earth’s axis (obliquity of the ecliptic) defines the seasons in temperate climates. The elliptical orbit of Earth can vary up to five percent, which affects the solar radiation that strikes the Earth and surface temperature.

Years ago, the Sahara Desert and Central Australia had forests due to the axis tilt which reverses at regular intervals.

World weather cycles are caused by changes in the shape of the Earth’s orbit around the Sun, the tilt of the Earth’s rotation, and the wobble of earth’s axis causing hotter summers and colder winters.  The solar orbit and axis tilt-shift every 41,000 years, a few degrees of tilt warm the northern hemisphere landmass causing ice melt, circular orbits can cool earth into an ice age.   [Youtube]

Every 21,000 years Earth gets a bit of a wobble on its axis from 22.1 degrees to 24.5 degrees — currently, it is 23.4 degrees. Each of those orbits can put us a bit further from the Sun causing hotter summers and colder winters.  This effects the Earth’s internal molten mantel waves causing the surface to bulge affecting the level of seafloor, gravitational spin (1,670 km) causes an equatorial bulge of 42.47  km — 21.36 km on each side, affecting ocean currents, temperatures and weather patterns, land rises and falls changing the ocean levels—it is how the Earth factory works. The equatorial bulge slowly wanders over centuries and low-lying land in the path will get wet.

When weight-shift imbalances the earth’s gyroscopic rotation or angle, the earth’s plates move to return the earth to a balanced spin. The Industrial Revolution literally moved mountains of soil and rock to build cities and dams, billions of tonnes.  This has created massive weight shifts the gyroscopic effect is trying to correct, this affects temperature and plate movement (continental drift) which again affects temperature.

NASA acknowledges the changes occurring to planetary weather patterns are caused by changes in the earth’s solar orbit and axial tilt, which are completely natural and normal as per the Milankovitch Theory.

The axis wobble, tilt and gravitational effect of the Sun cause the earth’s magnetic north pole to wander at the current rate of 55 km a year up from 14.5 km a year; last century it was in Canada, in 2000 it was in Greenland, now its heading to Siberia. There has been 183 pole reversals in the last 83 million years.  The poles flip every 200,000 to 300,000 years, it has been about 780,000 since the last one, so it is long overdue, such would have catastrophic consequences destroying our electrical system, leaving us exposed to dangerous high-level solar radiation.

That will create a memorable climate change event: If any of the Green history deniers survive — they will probably blame it on CO2. 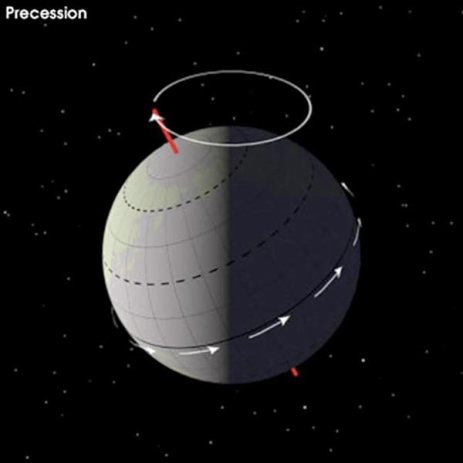 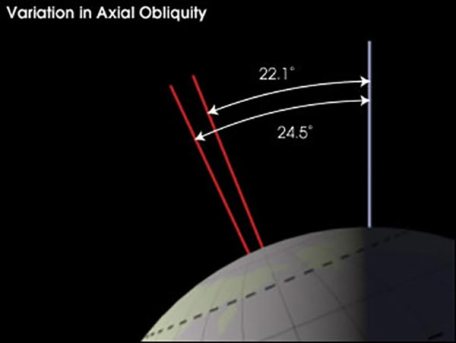 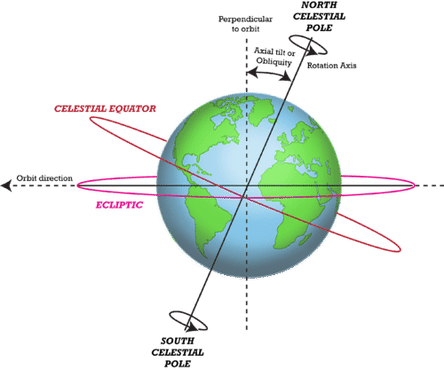 Superimposed on the daily solar cycle is the monthly lunar cycle, driven by the orbit of the Moon around the Earth. These two cycles interact to produce variations in atmospheric pressure and tides, and currents in the oceans and the atmosphere. These are the daily weather makers. 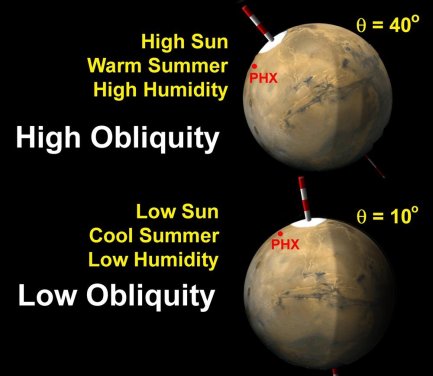 Example only: Showing how axis tilt controls the climate.

When supernovas collapsed millions of years ago, they discharged subatomic particles, these Cosmic-rays consistently strike Earth, when they meet water-vapour rising from the oceans they cause the formation of water droplets—making clouds. When Sun-spots form, which are massive nuclear reactions many times larger than the Earth with intense magnetic fields causing solar-winds which swirl around the Earth, these solar-winds deflect the Cosmic-rays from striking Earth which results in less cloud formation and more heat from the Sun warms the Earth.

When there are fewer Sunspots, more Cosmic-rays reach Earth, more clouds are formed, less Sun gets through and the Earth cools (from moderate to ice-ages) — IT IS THE SUN THAT DRIVES CLIMATE CHANGE.

It is the friction of the sola-winds sliding across the atmosphere that creates the Aurora’s, the dancing lights in the sky. 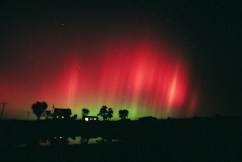 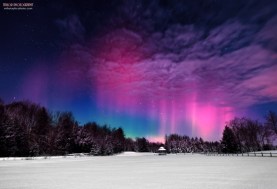 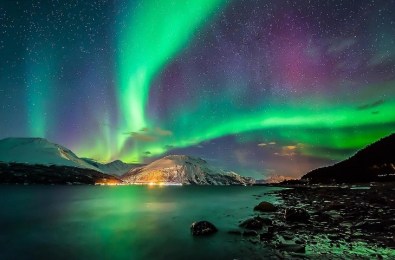 Friction of the sola-winds causing the Aurora’s

We cannot change the Sun—the intensity of the Sun’s magnetic field has more than doubled in the 20th Century; coupled with massive undersea volcanic activity and CO2 discharge and you have ocean temperature and acidity changes affecting ocean currents and weather patterns—and there is nothing we can do about it except record it.

Miniscule variations of CO2 are not in the equation, they are irrelevant. Yet many cannot grasp that simple axiom.

The History-Denier Greens, Politicians and others regularly tell us the arctic ice is melting and quote NASA figures to support their great alarm. They quote the summer melt figures repetitively, if we were to add all their quoted kilometres of summer ice melts over the last ten years there would not be much left of Antarctica — The fools deliberately do not quote the winter-freeze figures that show that every winter ice is reformed. They use very selective fraudulent quotations to misrepresent every facet of their nonsense theory.

On Remembrance Day 11 November 2019, in just one day there were 113 earthquakes worldwide, this is happening almost every day and is part of factors affecting our climate, often interlinked with volcanic and undersea activity.

Water vapour is the most potent greenhouse gas. Less cloud produces warmer temperatures— Climate Change is governed by many variable factors not CO2.  There have been Ice-Ages when CO2 was many times higher than now. From the Little-Ice-Age (1300 – 1850 AD) to the Medieval Warm Period (900 – 1300 AD) CO2 neither led nor followed temperature variations, it had no impact in either direction.

“No Experimental Evidence for the Significant Anthropogenic Climate Change.”