BOB Katter, Federal Member for Kennedy has had a gut-full of China’s trade terror tactics on Australian producers and has slammed the Federal Government for failing to aggressively market our produce to other countries.

It comes as China began its investigation into anti-dumping allegations, slapping Aussie wine makers with a 200 per cent duty from midnight. 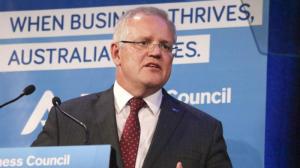 Morrison and his Cabinet are no different to the Chinese sycophants of the Labor Party. These global socialists believe Australia is doomed unless we conform to China. Australia is finished unless we dump China and find alternative markets.

Mr Katter said, “We wouldn’t be in this position if the lazy, useless b.a.s.t.a.r.d.s, who occupy – with their big fat backsides – the parliamentary benches in Brisbane and Canberra, got out there like Jack McEwen did when Britain went into the Common Market and we lost 30 per cent of our exports.

“McEwen drew up an agreement on the supply of beef, grain and coal into Japan – all of which made us extremely unpopular because it was only 20 years after the war – but it was successful.

“But they have done absolutely nothing to develop alternative markets. Clearly the VIP countries, Vietnam, Indonesia and the Philippines, our bloody neighbours who have 700m people living there should be the priority?!.

“They have managed to pick a fight with everyone – and well, I don’t know of any fights they have ever even won against Japan – but I certainly wouldn’t be provoking that little tiger either.

“It sure would be nice if we had 300 patrol boats with 60 cruise missiles on the back of them so we can defend our country. And yes, it may cost two per cent of the federal budget, but quite frankly it’s not going to break the bank.

“We must remember that we live on an island, with vast coastline, and are extremely vulnerable. We are overwhelmingly a European country in the middle of Asia with a landmass that is completely empty.

“You take out the coastal strip from Cairns through to Sydney, Melbourne and Adelaide, and take out a little dot around Perth, well you have less than one million people living there.

“’A land without people will be taken by a people without land’. That is the truism of history,” Mr Katter warned.