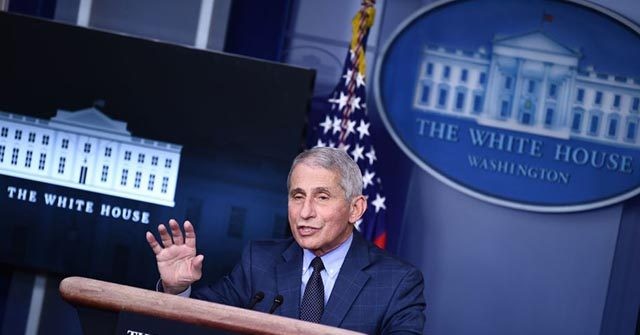 Dr. Anthony Fauci believes that Thanksgiving could mark the beginning of a bleak winter, warning that the pandemic could worsen throughout the holidays and encouraging Americans to “be careful” as Christmas approaches, though he is personally looking forward to “Christmas in 2021.”

In an interview with USA Today, Fauci explained that he will more than likely forgo his traditional Christmas plans, as he did for Thanksgiving. According to the outlet, he spoke to his three daughters virtually and enjoyed dinner with his wife.

“Let’s now make the best of the situation and show our love and affection for people by keeping them safe,” he said, repeating the cries of Democrat governors, some of whom have urged Americans to stay away from their loved ones on the holidays.

Fauci warned that the current surge of the Chinese coronavirus could continue through the new year:

If the surge takes a turn of continuing to go up and you have the sustained greater than 100,000 infections a day and 1,300 deaths per day and the count keeps going up and up … I don’t see it being any different during the Christmas and New Year’s holidays than during Thanksgiving.

Johns Hopkins University data reported 181,490 new cases of the virus on Thursday. Cases have been spiking across the U.S. despite the fact that leaders in well over two dozen states have imposed state and regional mask mandates, some of which have been in effect for months.

The data suggests the infections are going up regardless of the mandates. However, some researchers, including at the U.S. Centers for Disease Control and Prevention (CDC), have indicated that the effectiveness of mask mandates is conditional on compliance of other enacted mitigation measures such as social distancing. Still, some researchers have conceded that compliance is nearly impossible to assess.

In recent days, 32 states (and Puerto Rico) with statewide mandates in effect for over a month, and nine states with regional mask orders, saw their already rising average of new daily infections reach unprecedented levels.

The National Institute of Allergy and Infectious Diseases director added that Americans need to “be careful” as the big holidays, such as Christmas and New Year’s, approach, given the nature of such celebrations being indoors with “singing and laughing and eating and drinking.”

Earlier this week, Fauci warned Americans to wear a mask indoors while visiting others on Thanksgiving. The White House Coronavirus Task Force member also made waves last weekend after he suggested that masks and social distancing will be necessary, even after a vaccine is ready and available.