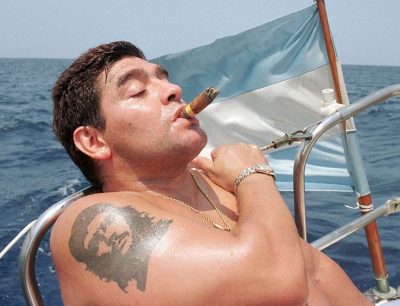 His life was a running planetary pop opera for the ages. From Somalia to Bangladesh, everyone is familiar with the basic contours of his story – the pibe from Villa Fiorito, a poor suburb of Buenos Aires (“I am a slum dweller”), who elevated football to the status of pure art.

Being the king of the pitch is one thing. Playing on the global pitch non-stop is a completely different ball game. Multitudes instinctively seized what he was all about – like he was always emitting a magic buzz in a higher frequency, beyond the Empire of the Senses.

Italians, who know a thing or two about aesthetic genius, would compare him to Caravaggio: a wild, human – all too human – pagan deity dwelling in light and shades, hitting all time lows over and over as virtually his whole life played out in public: the dizzying ballet of all inner demons exploding, family scandals, divorces, rivers of alcohol, doping, evading the income tax enforcers, Himalayas of Colombian marching powder, countless intimations of death amid perpetual joy.

He personified the non-stop crossover of Olympian Heights with The Harder They Fall: a walking – dribbling – fest of wild contradictions, beyond good and evil. To borrow, laterally, from T.S. Eliot, he was like a river, “a strong brown god – sullen, untamed and intractable.”

The late, great Eduardo Galeano did picture him as a pagan deity, just like one of us: “arrogant, womanizer, weak…. We’re all like that!” El Pibe was the ultimate dirty god – “a sinner, irresponsible, presumptuous, a drunkard.” He could “never return to the anonymous multitude where he came from.”

He may have mesmerized the world with the Argentina celeste jersey, but his masterpiece, arguably, was performed in real time at Napoli FC – the quintessential Italian working class club. Instinctively, once again, he aligned with the underdogs, the despised, the beggars’ banquet, and like a natural-born David he slew the northern Goliaths – Juventus, Milan, Inter.

He never ceased to see himself as a kid from the barrio. And that forged his politics – his instinct always pointing towards justice. He was always on the progressive side of history – a tattoo of Che on his right arm, a tattoo of Fidel on his left leg. 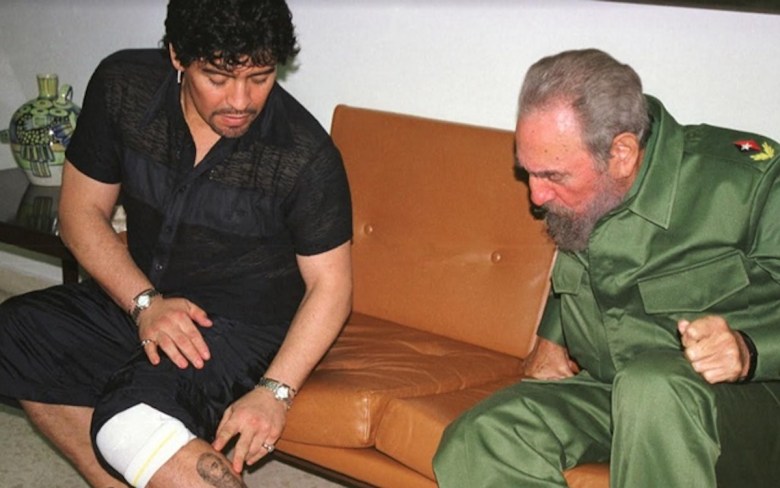 El Comandante Fidel was like a surrogate father. (Another intimation from the heavens: They died on the same date four years apart.) He embraced Hugo Chavez, Evo Morales and Lula. And he considered himself “a Palestinian.” Anti-empire – all the way.

By poetic justice, the Hand of God had to be intertwined, in the same match, with the most spectacular goal in history. “What planet are you from?”  cried the legendary Uruguayan-born narrator at an Argentina radio station. The dirty god himself later acknowledged those were a one-two counterpunch against the Brits for the Falklands/Malvinas.

In “10.6 Seconds,” set on that fateful June 22, 1986 in the Aztec Stadium in Mexico, Argentine writer Hernan Casciari engaged in no less than an astonishing update of “El Aleph,” by that Buddha in a grey suit Jorge Luis Borges. That sets the legend in stone – echoing in  eternity:

“The player knew he made forty four steps and twelve ball touches, all with his left foot. He knows the play will last 10.6 seconds. Then, he thinks it’s about time to tell the whole world who he is, who he was and who he’ll be till the end of time.”