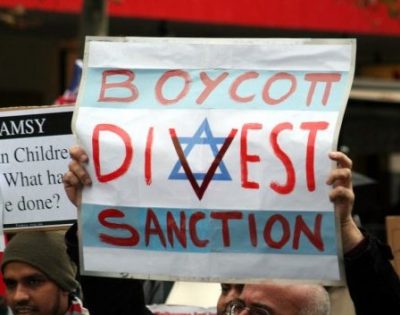 Responding to the United States Department of State announcement designating the Boycott, Divestment, and Sanctions (BDS) movement as antisemitic and planning to identify organizations supporting BDS with a view to reviewing and halting their funding, Bob Goodfellow, the Interim Executive Director of Amnesty International USA, issued the below statement:

“The Department of State’s targeting of groups advocating for using peaceful means, such as boycotts, to end human rights violations against Palestinians as antisemitic violates freedom of expression and is a gift to those who seek to silence, harass, intimidate and oppress those standing up for human rights around the world. This is simply the latest attack from a US government determined to undermine the universality of human rights and the global fight against racism and discrimination, including antisemitism.

“Advocating for boycotts, divestment and sanctions is a form of non-violent advocacy and of free expression that must be protected. Advocates of boycotts should be allowed to express their views freely and take forward their campaigns without harassment, threats of prosecution or criminalization, or other measures that violate the right to freedom of expression. Instead of attacking and restricting BDS activities the US should end such measures and instead ensure that BDS advocates are free to express their views and take forward their campaigns without harassment or threats of prosecution.”

“The US administration is following Israeli government’s approach in using false and politically motivated accusations of antisemitism to harm peaceful activists, including human rights defenders, and shield from accountability those responsible for illegal actions that harm people in Israel, in the Occupied Palestinian Territories, and here at home. The process comes across as particularly hypocritical and deceitful coming from an administration that has emboldened neo-Nazis, white supremacists and other groups who advocate violence and discrimination, shown a callous disregard for international law, and favored Israeli policies that result in institutionalized discrimination and systematic human rights violations against millions of Palestinians.

“This process also hurts Jewish people by equating Israel with Judaism and likening criticism of Israeli government policies and practices to antisemitism. It undermines our work in the Middle East and other regions to protect the rights of religious and other minorities.

“We will continue to support our Israeli and Palestinian colleagues, including BDS activists, who like human rights defenders around the world, speak up when justice, freedom, truth, and dignity are denied.”