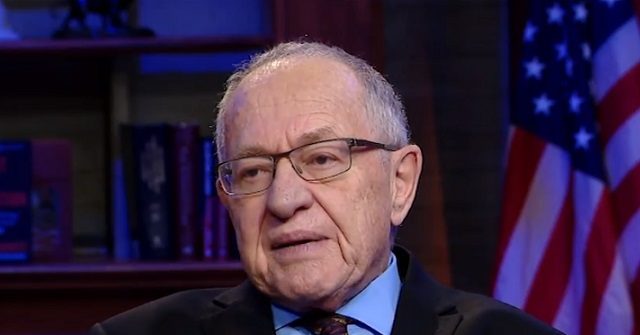 During this week’s broadcast of FNC’s “Sunday Morning Futures,” constitutional legal scholar and Harvard Law professor emeritus Alan Dershowitz said there was still a legal path forward for the Trump campaign to win the presidency, but he did not think it was likely.

Dershowitz told host Maria Bartiromo that the success of President Donald Trump’s effort would be contingent on his legal team’s ability to produce evidence in a short amount of time.

BARTIROMO: President Trump’s legal team has just three weeks left to gather enough evidence of fraud to contest the 2020 election results in court, something Sidney Powell, one of the lead attorneys on the case, says she can do.

Here is what she told me this week on “Mornings With Maria” on Friday.

BARTIROMO: Will you be able to present, are you planning to present actual evidence of all that you have said, Dominion voting machines swapping votes from Trump to Biden, as well as an effort to actually change the results of an election? You will be able to prove that in court in the next two weeks?

SIDNEY POWELL, ATTORNEY FOR PRESIDENT TRUMP: Yes, I fully expect we will be able to prove all of it in court within the next two weeks, although the fraud case itself doesn’t have to be done within the two weeks.

Alan, it is good to see you this morning. Thank you so much for being here.

BARTIROMO: Alan, we want to get your independent opinions here, because we know what Rudy Giuliani and what Sidney Powell has been charging.

Can you tell us if you believe there is a path for victory for President Trump, amidst these charges?

DERSHOWITZ: Well, let me give you my completely objective, not wishful thinking, constitutional analysis.

They have two or three legal constitutional paths. For example, in Pennsylvania, they have two very strong legal arguments, one, that the courts changed what the legislature did about counting ballots after the end of Election Day.

They also have a winning issue on the Supreme Court on equal protection, that some counties allowed flawed ballots to be cured, while others didn’t. Bush vs. Gore suggests that an equal protection argument can prevail.

The problem with that argument is, they don’t have the numbers necessarily to support it. If it’s right that Biden is ahead by some 70,000 or 80,000 votes, they have to show enough contested votes, under those two legal theories, to change the outcome.

The other legal theory they had, which is a potentially strong one, is that the computers, either fraudulently or by glitches, changed hundreds of thousands of votes. There are enough votes to make a difference, but I haven’t seen the evidence to support that.

And, of course, the media wants to see the evidence now, Alan.

BARTIROMO: But Sidney Powell and Rudy Giuliani and Jenna Ellis continue to say that they aren’t going to litigate this in the public square, in the media space. They are going to drop lawsuits.

Now, I — one of my sources tells me that one of the first suits that they are going to bring is this week in Georgia. Let me show you a list of some of the things that the legal team of President Trump is charging and get your thoughts on this.

BARTIROMO: You just mentioned the computers.

This is — has to do with Smartmatic election software. They say, number one, observers prevented them from seeing the ballots. Number two, there’s inconsistent laws of curing ballots. Number three, the in-person voters told that they voted already and officials told not to look for defects and to backdate ballots before November 3.

Also, in terms of the computers and the software, Smartmatic election software was developed, Sidney Powell says, in Venezuela, with porous security and built-in functionality allowing the administrators to override security features.

We haven’t seen this, so we don’t know. But this is the kind of evidence that they say they have. Your reaction?

DERSHOWITZ: Well, evidence is very difficult to bring within two weeks or the three-week period. You need to have witnesses, experts subject to cross-examination, and findings by a court.

I don’t know what Powell means when she says they have more than two weeks or three weeks to prove fraud. Once the electors are certified, and once they cast their vote, I can’t see any legal route to undoing that, even if they were to find fraud later on.

But she said that she thinks the lawsuits will be filed by this Friday. We have to see the evidence.

DERSHOWITZ: If the evidence is there, then there will be a trial.

Remember also, these have to go to state court first. There’s no such thing as a presidential election. There are 50 state elections. The Pennsylvania case is already in the Supreme Court. But these other cases have to go first through either the state or the federal trial courts before they get to the Supreme Court.

It doesn’t look like there will be enough time to bring the case to the Supreme Court before the safe harbor provision kicks in, before the Electoral College meets.

Their strongest case, if they have the evidence…

DERSHOWITZ: … is that computers may have turned hundreds of thousands of votes. That’s a wholesale argument, rather than a retail argument.

DERSHOWITZ: They can’t turn the election around on retail arguments, one observer here, a few votes here.

And for that, they’re going to need overwhelming evidence, and I haven’t seen it.