Cape York Peninsula. Police are on the look out for an ambulance stolen from Aurukun. It is described in picture: 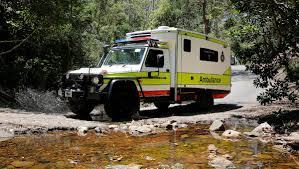 It is not known if there was a patient in it when stolen. It is believed the vehicle was to be used as an undercover grog runner from Cooktown to keep the community riots running smoothly.

Coen. Four local Aborigines charged with killing a bullock, the property of a local grazier, fronted the Coen Magistrates Court on November 11. All were remanded until January.

Cattle duffing has been rife on the Peninsula for a few years according to a prominent grazier.

He said a mob of weaners recently had been stolen from a property near Weipa and breeder cows were missing from other properties in the Northern Peninsula area.

He said there is a flourishing trade in stolen meat allegedly slaughtered by local inhabitants from roadside killings. 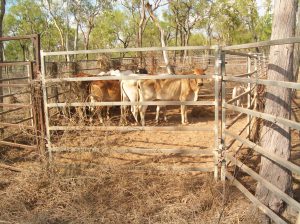 “It is always hard to catch these people and we know who is doing illegal slaughtering but the authorities don’t act on it,” one source claimed.

The unprecedented high price of cattle has made stock stealing quite lucrative and in spite of stock being branded and ear-tagged with NLIS electronic devices, few rustlers ever get caught.

Peninsula Development Road.  Road transport companies report the gravel sections of the PDR are in reasonable shape which is unusual for this time of year. One saving grace is the lowest ever number of tourists converging on the Cape due to Covid lockdowns and border closures.

Finding water for gravel maintenance is always a problem at this time of year particularly when the National Parks and Wildlife Service refuses to allow road maintenance crews to take any of the abundant surface water from national parks either from creeks, lagoons or rivers.

Aboriginal-owned land also has plentiful water availability which in some cases can be accessed at a cost to the Main Roads Department.

Truckies report there are several dangerous bitumen sections of recently-constructed highway that could cause a problem for unwary drivers. 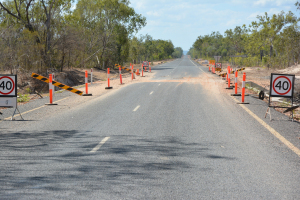 A colllapsed culvert on a new bitumen section south of Musgrave. It had been signposted for 18 months but has recently been patched up

Just north of Archer River crossing is a sunken culvert, which began sinking not long after it was put there in 2018. MRD has been aware of the danger spot for nearly two years but nothing has yet been done to fix it.

A dangerous collapsed culvert on the bitumen south of Musgrave has been patched up after being signposted and in disrepair for more than 18 months.

Along the older bitumen section through Wolverton Station, north of Archer River the sub-structure has moved considerably causing severe rippling of the surface for about 500 metres.

Weipa.   Rio Tinto’s Andoom mine, situated 10 klm north of Weipa on the Mapoon Road is set to close in three years but it could be sooner if the mining giant does not find new markets for the non-renewable, valuable resource bauxite. Locals will be left with a large hole in the ground albeit rehabilitated somewhere near to its original state.

Bauxite royalty payments from this mine will also cease for the Mapoon community. 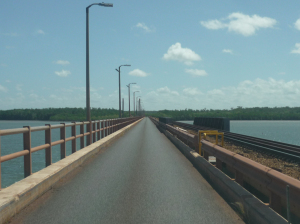 Mapoon residents will be disadvantaged because the ailing, Rio-owned road and rail Mission River Bridge over the Weipa Inlet will not be maintained after Andoom closes. This will prevent easy road access to Weipa for the remote community.

In ten years time this bridge will be a rusting navigational hazard and an eyesore.

As a result a new bitumen bypass road has been constructed through the disused, large cattle property Billys Lagoon handed over to local Aborigines about 10 years ago. The cost of the road, believed to be part-funded by the State Government has not been divulged. Earthmoving contractors say it would be more than $10 million.

One contractor not involved in the project said after inspecting the road the bitumen construction was less than industry standard.

from a Weipa correspondent