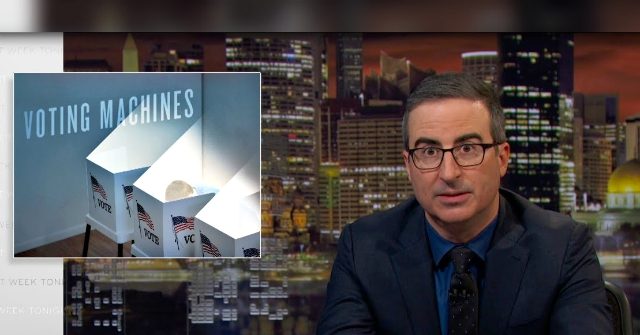 Last year, John Oliver expressed his concern with Direct Recording Electronic (DRE) voting machines, which he explained has voters vote directly onto the machine, with no paper trail available.

“They are very bad. If something goes wrong with one of them, you would basically never know, because you can’t audit the results. And things have gone wrong,” John Oliver said.  “In one local New Jersey election, a husband and wife were both running for seats on their county’s Democratic committee. The DRE machines said that they lost, but they were in the unusual position of actually knowing that that was a mistake.”

“In one local New Jersey election, a husband and wife were both running for seats on their county’s Democratic committee,” Oliver continued. “The DRE machines said that they lost, but they were in the unusual position of actually knowing that that was a mistake.”

The talk show host then played a news clip of the couple — Ernest and Cynthia Zirkle — explaining what had happened.

The results had been switched with those of their opponents.

“We started calling people that we thought we knew voted for us, because it was just a in this district of this township, and we know everybody in this district,” added Ernest Zirkle.

Oliver noted it was true that Cynthia Zirkle had “literally went around and got signed affidavits from people saying that they had voted for her.”

“The fact is, unless you happen to personally know everyone who votes for you on a paperless DRE machine, there is no way to know the results,” he said. “It’s a pretty good case against them, which makes it, frankly, completely insane that New Jersey not only still uses them, but plans to keep using them for the 2020 election.”

“And it’s not just New Jersey, in 2016, 20 percent of voters voted on paperless DREs, and an estimated 12 percent will use them in 2020, meaning 16 million Americans, spread out across all these states, are set to be voting on machines that pretty much everyone agrees are deeply, deeply flawed,” Oliver continued. “And if they malfunction, there could be no way of knowing, which is absolutely terrifying. What we have to do here is obvious, it’s so obvious, in fact, even this guy understands it.”

John Oliver then played a clip of President Donald Trump explaining why it is important to have a paper backup system with regards to voting.

Dominion Voting Systems — which has faced scrutiny in the wake of the 2020 presidential election — has an ImageCast X model, which can be deployed as either a Ballot Marking Device (BMD) or a Direct Recording Electronic Device (DRE), according to The Verified Voting Foundation.

While Oliver has made his case for why he believes DREs are dangerous, Verified Voting has also explained why it believes BMDs can be as well.

In 2019, Verified Voting clarified its position regarding the use BMDs in elections:

Verified Voting specifically opposes the purchase and deployment of new voting systems in which all in-person voters in a polling place are expected to use BMDs. The trustworthiness of an election conducted using BMDs depends critically on how many voters actually verify their ballots, and how carefully they do it. All voters who vote on BMDs should be made aware of the importance of carefully and conscientiously verifying their ballots before casting them, and should be actively encouraged to do so. However, empirical research thus far shows that few voters using BMDs carefully verify their printed ballots. Moreover, if voters do verify BMD-marked ballots and find what they believe are discrepancies, there is no reliable way to resolve whether the voters made mistakes or the BMDs did. For these and other reasons (such as cost) Verified Voting recommends that the use of BMDs be minimized.

Verified Voting appeared to have since wiped clean the section of its website clarifying its position on the usage of BMDs, but an Internet archive shows what was displayed on the page in August.