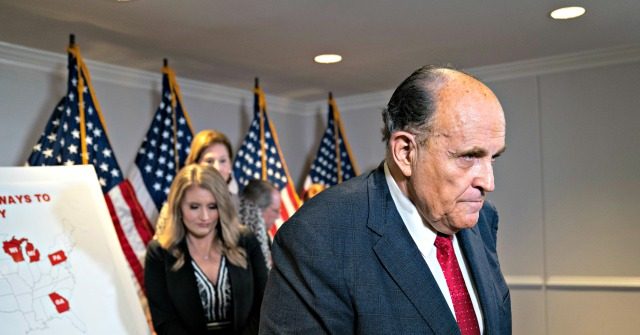 President Donald Trump’s legal team held a press conference on Thursday about the election fraud that’s been uncovered — a large amount of it reported by American citizens from both major political parties who want to preserve U.S. election integrity.

“That takes us to Michigan, where there was an honest Democrat who said they were cheating,” Rudy Giuliani, Trump’s lead attorney, said to reporters at the press conference. “We’ll show you her affidavit, because I know you keep reporting, falsely, that we have no evidence.”

“That we have no specific acts of fraud,” Giuliani said. “That’s because the coverage of this has been almost as dishonest as the scheme itself.”

“The American people are entitled to know this,” Giuliani said.

Giuliani said that the press should not lie about what the investigation has revealed so far, including that it is Americas coming forward to share their stories of election fraud.

“You don’t report to them that a citizen of this country, a very fine woman, who is willing to allow me to give you her name…” Giuliani said. “I can’t give you all these affidavits, because if I do these people will be harassed, they will be threatened.”

But some were willing to make their affidavits public, including Jessie Jacob, who works for the city of Detroit.

“She was assigned to voting during in September,” Giuliani said. “She was trained, basically, trained to cheat. She said, ‘I was instructed by my supervisor to adjust the mailing date of these absentee mail-in packages to be earlier than when they were sent.’”

“The supervisor made that announcement for all workers to engage in that fraudulent practice,” Giuliani said. “That’s not me saying that. The’s an American citizen saying that under oath.”

Giuliani also said this same woman said she saw election workers illegally coaching people on whom to vote for.

He told reporters much of the evidence is public and reporters can review it online, including the Michigan case, Constantino v. City of Detroit.

“All you’ve got to do to find out if I’m misleading you at all is to look at the lawsuits,” Giuliani said. “Look what’s alleged, look at the affidavits.”

Giuliani said that while not all affidavits have been made public, citizens have provided hundreds of them.