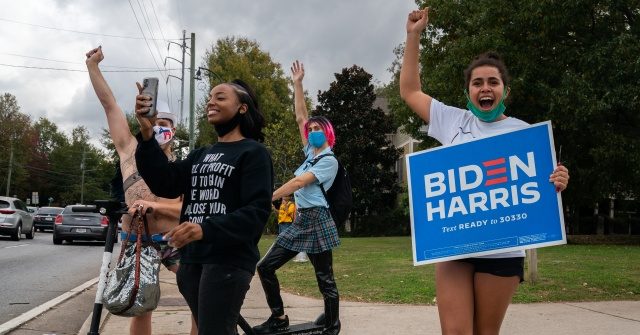 Georgia’s “demographic changes” are helping turn the state from a comfortably red region to a Democrat stronghold, media analysis concludes.

In reporting on how Georgia went from red to blue, the media has naturally sought a protagonist — and found the perfect one in Stacey Abrams. Early on, Abrams recognized that demographic changes in Georgia meant Democrats could have a chance there if they organized. So she formed a blueprint for a gubernatorial race, presented her argument to donors across the country and executed that plan, winning more voters than any Democratic candidate in Georgia’s history. [Emphasis added]

But Abrams did not single-handedly turn demographic change into Democratic wins, and she was one of the first to point out that fact. This year’s victory in Georgia was thanks to a hugely diverse and collective effort across the state — a base-focused campaign among dozens of organizations to activate thousands of volunteers, who talked to their neighbors and turned out the vote. While organizations like the New Georgia Project registered new voters, others such as Asian Americans Advancing Justice in Atlanta and the Georgia Association of Latino Elected Officials worked to bring out voters of color. Black Voters Matter, an organization led by Black women, invested in more than 600 Black-led groups on the ground and used targeted messaging to mobilize Black voters, and the Movement Voter Project directed significant funding to community groups in the state [emphasis added].

Likewise, analysis from FiveThirtyEight’s Perry Bacon Jr. notes that Georgia’s demographic changes over the last two decades are almost undoubtedly one reason the state has tilted blue in recent elections:

Take Gwinnett County. It was 67 percent non-Hispanic white in 2000; it is now around 35 percent white. Likewise, Cobb County was 72 percent white in 2000, 62 percent in 2010 and is about 50 percent white now. In part because of those changes in the Atlanta metro area, the share of the voting-eligible population in Georgia that is white dropped from 68 percent in 2000 to 58 percent in 2018, according to Pew Research Center. That drop is the biggest decline in the percentage of white voters in all but eight other states. [Emphasis added]

“Demographic change is likely a big part of the story, combined with higher participation from some of the faster-growing groups,” said Tom Bonier, who runs a Democratic-leaning political data firm called TargetSmart.

Abrams won 1.9 million votes in 2018, almost double the 1.1 million votes of Georgia’s 2014 Democratic gubernatorial nominee. Biden won almost 2.5 million votes, compared to Clinton’s 1.9 million. There are probably lots of reasons for the increased number of Democratic voters — particularly anti-Trump sentiment and Georgia’s changing demographics. Plus, Republican voter turnout in Georgia also surged this cycle, so maybe the Trump era has just boosted turnout among all groups. All that said, it’s worth isolating the role of Abrams, because she has executed a specific, turnout-based strategy in Georgia for nearly a decade and has pushed for the Democratic Party to join her in implementing it [emphasis added].

In contrast, the share of Hispanic and Asian voters hit all-time highs, comprising 3.0 percent and 2.5 percent of the electorate respectively.

“In an election marked by a big rise in turnout, Black turnout increased, too, but less than that of some other groups,” the New York Times reported. “The findings suggest that Mr. Biden’s win in Georgia may not yet herald a new progressive majority in what was a reliably red state, as Democrats still depend on the support of traditionally conservative voters to win statewide.”

Specifically, between 2000 and 2020, the number of foreign-born voters and their voting-age children in Georgia has boomed by 337 percent. In contrast, the native-born voting-age population in Georgia has increased by just 22 percent over that same period.

The Washington Post, New York Times, the Atlantic, Axios, the Los Angeles Times, and the Wall Street Journal have all admitted that rapid demographic changes because of immigration are tilting the nation toward a permanent Democrat dominance.

“The single biggest threat to Republicans’ long-term viability is demographics,” Axios acknowledged last year. “The numbers simply do not lie. … [T]here’s not a single demographic megatrend that favors Republicans.”

Based on vote tabulations before Georgia’s ongoing recount, Biden won the state by less than 13,600 votes against President Trump.