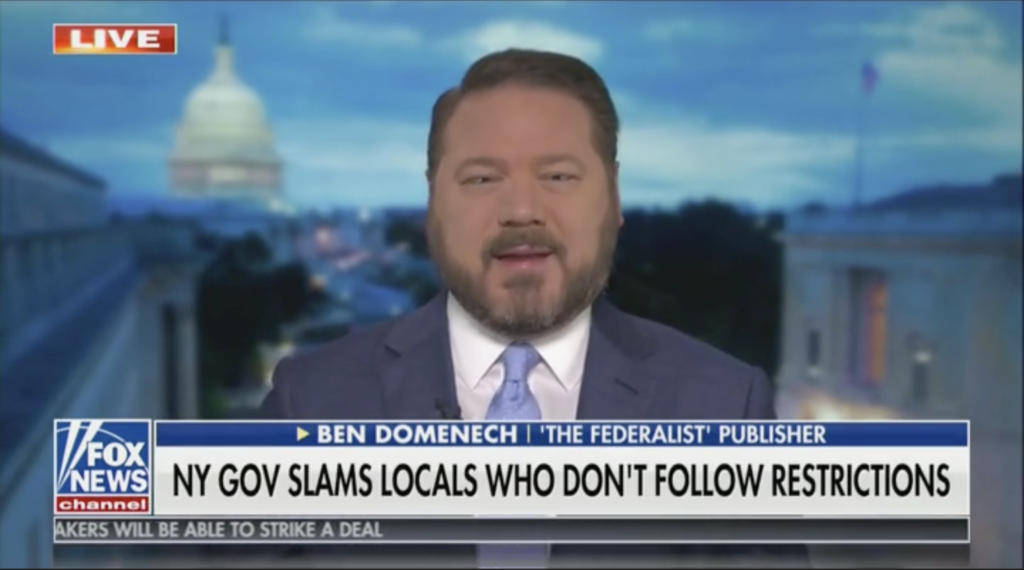 The Federalist Publisher Ben Domenech slammed New York Gov. Andrew Cuomo on Thursday for shutting down the state’s schools and blaming New Yorkers for another round of “self-imposed” lockdowns.

“Self-imposed? When Andrew Cuomo made the decision to put people in nursing homes, that wasn’t self-imposed. It was the government,” Domenech said.

“The responsibility really is his. People are looking to our political leaders in this moment for responsible leadership, not bluster, not hiding from the actual consequences of their decisions,” he added.

Domenech noted on “Fox and Friends,” that schools are essential and operating in other countries without any significant spread, and Cuomo’s decision to shut them down contradicts the science.

“You look over across the Atlantic and you see in France and Germany, they are experiencing significant spikes right now. They are locking down a lot of things. You know what they aren’t locking down and closing? Schools,” Domenech said, noting that research suggests schools are “not a source of major spread of the coronavirus.”

That’s something that is a good thing and it’s something that teachers should be able to respond to and participants should be able to respond to with optimism and hope. Instead, what we are learning is one of the exceptional things about America, unfortunately, is the power of these teachers’ unions politically to get what they want out of these scenarios as opposed to putting kids first and the prospect. I have to say of kids losing an entire year of schooling to this type of false teaching of this — of this blended learning and the like is a really enormous concern not just to me but I think to all Americans about the future that these kids are going to have if we don’t turn things around.

According to Domenech, Cuomo will be held accountable for his blatant opposition to science.

“It’s unserious, it’s wrong, it’s making decisions not based on science but based on blustery attitude and I hope that people are actually waking up to it, that New Yorkers will respond to it and push back against it,” he said.

California Gov. Gavin Newsom is also on the hook for skirting his own state’s COVID-19 lockdown crisis by partying at a dinner with health officials after telling Californians to celebrate Thanksgiving alone.

“In this case, Gavin Newsom’s hypocrisy, I appreciate the woman who took the pictures. Without the pictures, he would have gotten away with spinning this and pretending like he didn’t do anything wrong,” Domenech said.

“That to me is the highest level of hypocrisy and should be called out,” Domenech added. “We should all be able to have the kind of meal Gavin Newsom had.”

Thanksgiving, Domenech said, is a holiday worth celebrating without the government telling people what to do.

“This Thanksgiving, the holidays, these are really important to a lot of Americans. It’s a time when we can be grateful even after times of great and terrible challenge,” Domenech said. “That was the context of the first Thanksgiving which we at The Federalist have a series running about, the 1620 Project about pilgrims and lessons learned from them.”