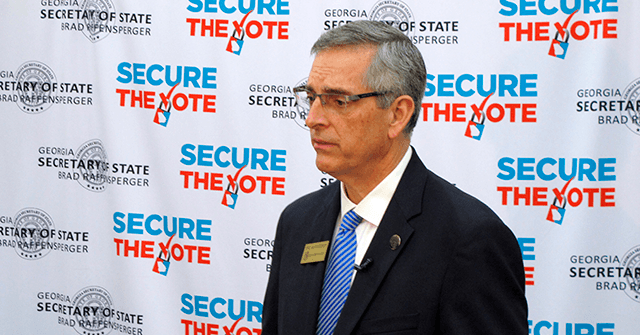 Wednesday on CNN’s “The Lead,” Georgia Secretary of State Brad Raffensperger dismissed allegations of voter fraud in Georgia in the presidential election earlier this month.

He acknowledged the possibility of clerical errors but said he did not anticipate a change in the outcome.

“We have not seen any widespread voter fraud,” he said. “The president has picked up some votes in a few of the counties that made some clerical errors. It wasn’t the machines. But at the end of the day, he started with 14,000. He’s about 12,000 now. But we’re finishing up, waiting for a few more counties to get back to us, large counties, but I don’t believe at the end of the day it will change the total results.”

He told CNN’s Jake Tapper he sees the outcome will be still in Joe Biden’s favor for his state of Georgia when asked.

“Yes, I believe that’s the way it will turn out,” Raffensperger answered.

“I’ve been a lifelong Republican,” he said. “I’m a conservative Christian Republican. And you look at my voting record. I have been endorsed by pro-life business, pro-business groups, National Federation of Independent Businesses. I’m a business owner. And so, people say that I’m not Republican — it’s crazy talk. At the end of the day, when people want to create dissension among the Republican Party in the runoff race, it’s not helpful to the person, the candidate. So I’m not going to comment further. But I know at the end of the day, election matters, and it matters in this office. I’m going to make sure to count every legal, lawful vote, and we’re not going to count any illegal votes.”

“Everything I have done in this office, we outlaw ballot harvesting,” Raffensperger added. “We understand it’s a bad deal to do ballot harvesting. We outlawed it. That was me. That was my team. We now have an online absentee ballot portal which has photo ID. And that was our team that stood that up in less than two weeks when we had this huge expansion of absentee ballots. So, my record will stand on itself. We’ve done a great job. We’ve defeated the issue of having long lines in Georgia. On Election Day, there was a two-minute average wait time. The race is a lot closer than we thought, but that goes back to the candidate for president who told people not to vote absentee. So, 24,000 Republicans that actually voted absentee in the June primary did not come out in the fall and vote. They did not vote absentee nor in early voting or the day of the election, 24,000, and that’s the winning margin to make there.”