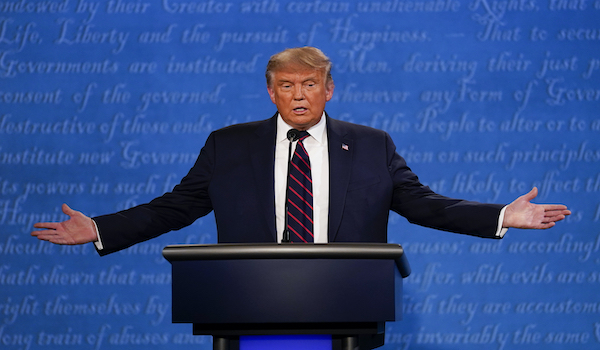 Fox News was quick to call the election for Joe Biden, despite President Trump and his campaign filing lawsuits demanding recounts in several states.

Now Fox News is saying President Trump should work with the Biden team for a smooth transition of power. It seems Fox is abandoning Conservatives and pushing the Leftist agenda.

Fox and the fake news

Fox News has been sliding further and further Left in the past year. Many viewers have jumped ship, moving on to better options such as NewsMax and One America News Network. President Trump has been lashing out at Fox News as well, calling them fake news and saying they’re no better than CNN.

Fox News anchor Chris Wallace hosted the second presidential debate where he pressed President Trump with tough questions while lobbing softballs at Joe Biden. During the debate, Trump joked that he was debating both Wallace and Biden.

In a recent Fox News segment, host Neil Cavuto cut away from White House Press Secretary Kayleigh McEnany as she was outlining the President’s claims of voter fraud in multiple states.

“Whoa, whoa, whoa, Cavuto interrupted. “I guess we have to be very clear that she’s charging that the other side is welcoming fraud and welcoming illegal voting. Unless she has more details to back that up, I can’t in good countenance continue showing you this. I want to make sure that maybe they do have something to back that up. But that’s an explosive charge to make that the other side is effectively rigging and cheating.”

Is this for real!? Did @TeamCavuto really cut away from that because they “had no evidence”!?
Newsflash, Neil! – You are not a judge or jury! They do not owe YOU evidence!
Carry the press conference!#EnemyofThePeople‼️‼️‼️

The election is still undecided

Several states have begun audits and recounts of the votes. Fayette County Georgia just found a memory card with 2,755 uncounted votes. In Dekalb County, an observer filed an affidavit after witnessing an incorrect tally of votes.

The tally had 13 votes for President Trump and 10,000 votes for Biden. The actual tally was 13 Trump votes to 1,000 Biden votes, a 9,000 vote error. Strange how these “errors” always seem to favor the Democrats.

Despite the ongoing investigations into voter fraud, Fox News thinks it’s time to start working with the Biden team. Fox and Friends co-host Brian Kilmeade said, “It’s in the country’s best interest if he starts coordinating on the virus and starts coordinating on security with the Biden team.” Trump has not conceded the race and he’s convinced that he won in a landslide.

Many of his supporters feel the same. The American people deserve a fair and transparent election. President Trump has come too far and fought too hard to just roll over and let the Democrats steal this election. Us Republican voters refuse to let that happen.

Brian Kilmeade says “it’s in the country’s best interest if [Trump] starts coordinating” with President-elect Biden on COVID-19 and security: “Just brief them … so we don’t drop the ball in a little while.” pic.twitter.com/rJF6NOXnGl