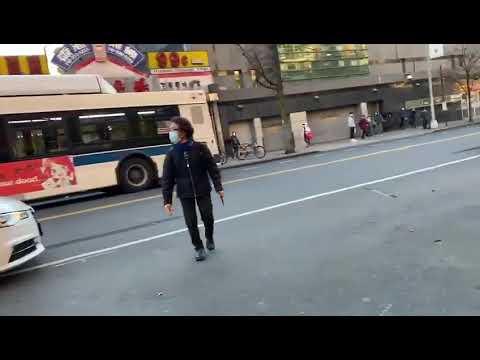 An argument over a parking spot turned violent on Monday, after an angry Queens driver attempted to run over his adversaries and ended up plowing through the window of a brand new bakery, police said.

At least four people were injured in the road rage assault, which happened on Kissena Boulevard near Flushing’s Main Street just after 5 p.m., according to an NYPD spokesperson.

Surveillance and bystander video shared with Gothamist shows a curbside brawl between four men that broke out over the coveted parking spot. One of the assailants can be seen swinging a baseball bat at another man, who police identified as 24-year-old Jie Zou.

Zou then got into his Audi A6 and attempted to run over the bat-wielding man and his friend, according to police and witnesses. In the process, he jumped the curb and plunged through the window of Rainbow Bakery, which was celebrating its grand opening on Monday.