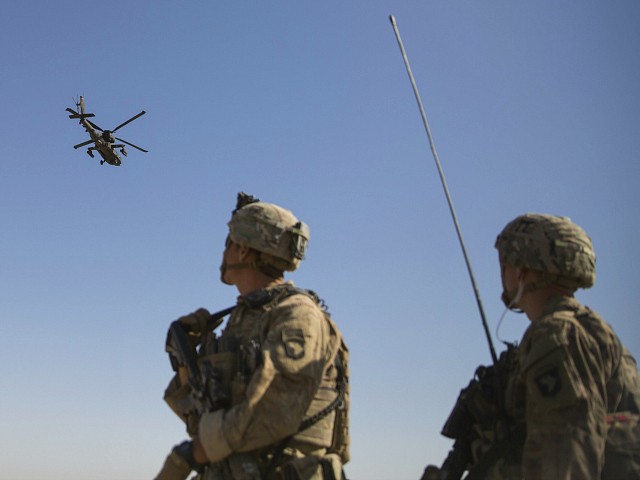 “I am formally announcing that we will implement President Trump’s orders to continue our repositioning of forces from those two countries,” Miller said. “By January 15th, 2021, our forces, their size in Afghanistan, will be 2,500 troops. Our force size in Iraq will also be 2,500 by that same date.”

Miller said the drawdown would be executed in a way “that protects our fighting men and women, our partners in the intelligence community, and diplomatic corps, and our superb allies that are critical to rebuilding Afghan and Iraqi security capabilities and civil society for a lasting peace.”

Miller said the U.S. continues to stand with Afghan President Ashraf Ghani as his government works towards a negotiated settlement with the Taliban for peace.

The move brings down the number of U.S. forces in Afghanistan from 8,600 and from the mid-5,000s in Iraq when Trump first entered office in 2017.

Miller, a former Green Beret who was one of the first soldiers to be inserted into Afghanistan when the U.S. war there began in 2001, made the announcement from the Pentagon podium.

He recognized those who sacrificed their lives in both wars:

We owe this moment to the many patriots who made the ultimate sacrifice and their comrades who carry forward their legacy. Together, we have mourned the loss of more than 6,900 American troops who gave their lives in Afghanistan and Iraq. And we will never forget the more than 52,000 who bear the wounds of war, and all those who still carry its scars – visible and invisible.

The drawdown was expected after Trump fired Defense Secretary Mark Esper last week, who had put up resistance to drawing down U.S. troops in Afghanistan below 4,500.

A senior defense official said on a background briefing with reporters before Miller’s announcement that the U.S. mission in Afghanistan would stay the same and declined to specify what kinds of U.S. forces and capabilities would be taken out and which ones would stay.

“The dynamic of the mission has not changed. The military officials and the president’s national security cabinet believe that the number of troops that we will go to by 15 January — 2,500 — can accomplish everything we have been doing so there is no need to keep the force posture at over 4,000 where it currently stands. So there is no elimination of capabilities,” the official said.

The official also said, however, if there is a “fracturing event or a dynamic situation in Afghanistan, both the secretary of defense and the president feel that we are well-postured to augment our posture in Afghanistan should it need be done.”

The peace talks between the U.S., Afghan government, and the Taliban are “still very much ongoing,” the official said.

Those talks, if successfully concluded, would result in a complete drawdown of all U.S. troops by April.

“At this point, we are not going to zero because we are continuing on the president’s approach, which he announced in June, which is to reduce troops to the number necessary to carry out the mission, and the generals and the civilian professionals believe that the 2,500 is the right number. The president agrees and has executed that decision,” the official said.

A senior administration official told Breitbart News that the troop withdrawals had been discussed before the presidential election, and was made independent of its pending results.