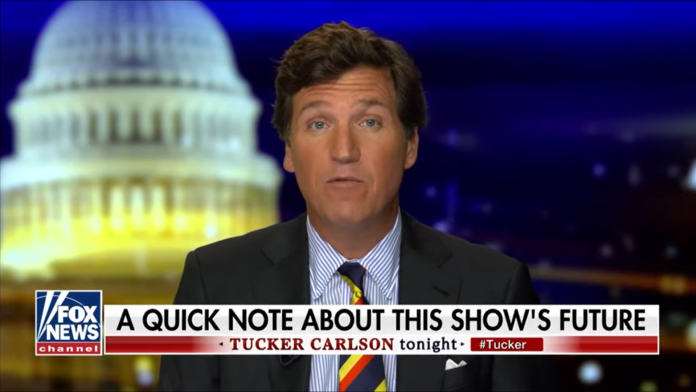 Tucker Carlson said on-air Monday night that his top-rated show on Fox News Channel, ‘Tucker Carlson Tonight,’ is not going anywhere. The announcement comes as a growing number of Conservatives, namely Trump supporters, have taken issue with how Fox covered the 2020 Presidential Election.

“Before we get to the next segment, a quick note about this show,” Carlson said.
“Over the weekend, we got a lot of calls asking if we’re leaving Fox News. Ironically, at that very moment we were working on a project to expand the amount of reporting and analysis we do in this hour across other parts of the company.”

[READ NEXT: Former Fox News Commentator Claims She Was Raped By Anchor, Says Network Retaliated Against Her]

“This show is not going anywhere. It’s getting bigger. The people who run Fox News want more of it not less, and we are grateful for that. We’ll have specifics soon. But as always, thank you for your trust in us. We’ll do our best to be worthy of it.”

The remarks from Carlson also come amid rumors that Donald Trump will start his own news channel when he leaves the office of the Presidency.