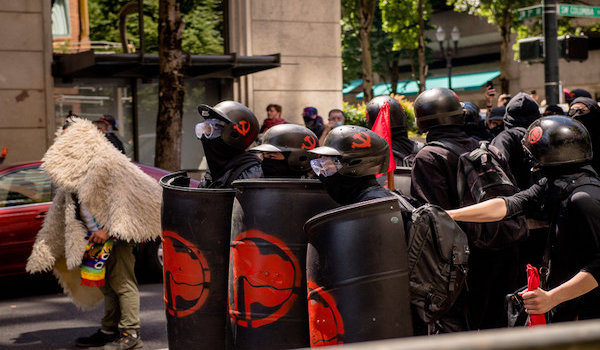 A recently leaked video call just exposed the radical Left’s plans for taking over America. Several Left-wing groups including BLM were on the call where they discussed shutting down Washington D.C. and taking over government buildings. The election violence is not over yet.

In the leaked Zoom call members of BLM, The Sunrise Movement and ShutDown DC are seen discussing their plans to invade D.C. after the election.

The group created a map of local police stations, government buildings, media stations and areas where Trump supporters will gather.

One member of the group named Lisa Fithian says, “What would it take to surround the White House and have people do stuff? We have to be willing to put our bodies on the line and take on some discomfort, sacrifice and risk to change things. It’s a war. Let’s be clear, Trump has got to go.”

The group then goes on to discuss specific gear needed and the tactics they will use to carry out their mission against the government and patriot groups.

These radical Left-wing activists make it clear they’re willing to use violence to force their Communist agenda on the American people.

It’s not all talk. BLM and Antifa members have already murdered several Trump supporters in cold blood this year. Lisa Fithian also talks about members arming themselves to take control of government buildings.

“In the situation of a coup or an insurrection or an uprising, whoever’s got the guns often can win. We don’t have a lot of experience taking over government buildings, and we might need to think about that. We may have some people who are willing to break the windows to get into the government buildings. We shouldn’t fight about that. Let’s do that.”

They also plan on winning over members of the police and military to fight for their cause. Maybe they forgot about their ruthless campaign against law enforcement this year, leavings dozens of officers dead or injured.

The rise of the radical Left

All year BLM and Antifa have been terrorizing cities across the country. Yet still they get support from the Democrats, big tech, mainstream media, sports, television and Hollywood.

The Left refuses to condemn their actions. It’s clear these Communist groups are the foot soldiers in their coup against President Trump. The Republicans screwed up big time by letting these terror groups operate with impunity. Now that the election is over, it’s time to get tough.

Maybe Trump will send in the troops to crush this Communist insurrection. Time will tell. If there’s any doubt that every American should have some way of protecting themselves, this video should be a wake up call.