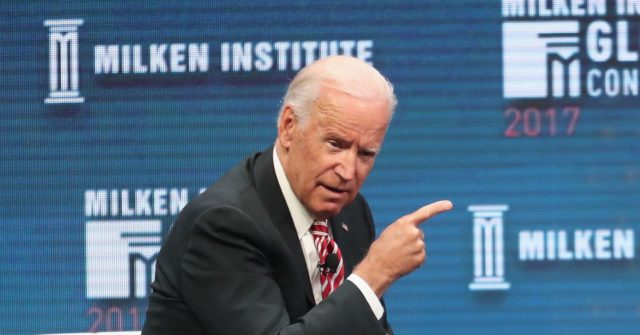 The New York Post confirmed Saturday what Breitbart News and others had reported earlier this year: that the Biden Cancer Initiative, founded by former Vice President Joe Biden, spent millions on staff salaries but did little about cancer research.

A cancer charity started by Joe Biden gave out no money to research, and spent most of its contributions on staff salaries, federal filings show.

The Biden Cancer Initiative was founded in 2017 by the former vice president and his wife Jill Biden to “develop and drive implementation of solutions to accelerate progress in cancer prevention, detection, diagnosis, research and care and to reduce disparities in cancer outcomes,” according to its IRS mission statement. But it gave out no grants in its first two years, and spent millions on the salaries of former Washington DC aides it hired.

Biden headed up the Cancer Moonshot Task Force when he was veep after his son Beau died of a brain tumor in 2015. After leaving office, the Biden Cancer Initiative sought to continue such efforts to provide “urgent” solutions to treating cancer, according to a 2017 press statement announcing its launch.

The Post report confirmed earlier reporting by the Washington Free Beacon, via Breitbart News, in June:

The cancer research non-profit that former Vice President Joe Biden created after leaving the Obama administration in 2017 spent two thirds of its money on staff, with top executives getting as much as six-figures, before shuttering.

The Washington Free Beacon reported on Thursday that the Biden Cancer Initiative directed 65 percent of its total expenditures to staff compensation between 2017 and 2018. Overall, the group raised $4.8 million during the those two years, spending slightly more than $3 million on salaries and benefits for its employees.

“That is well above the 25 percent charity watchdogs recommend nonprofits spend on administrative overhead and fundraising costs combined,” the outlet reported, noting that Biden’s nonprofit “did not cut a single grant to any other group or foundation during its two-year run.”

As Breitbart News noted in October, Biden met with businessman Tony Bobulinski in May 2017 to discuss a potential business venture with a Chinese energy company. The meeting took place before the prestigious Milken conference in Los Angeles — where Biden was to speak about his family’s efforts to fund cancer research.